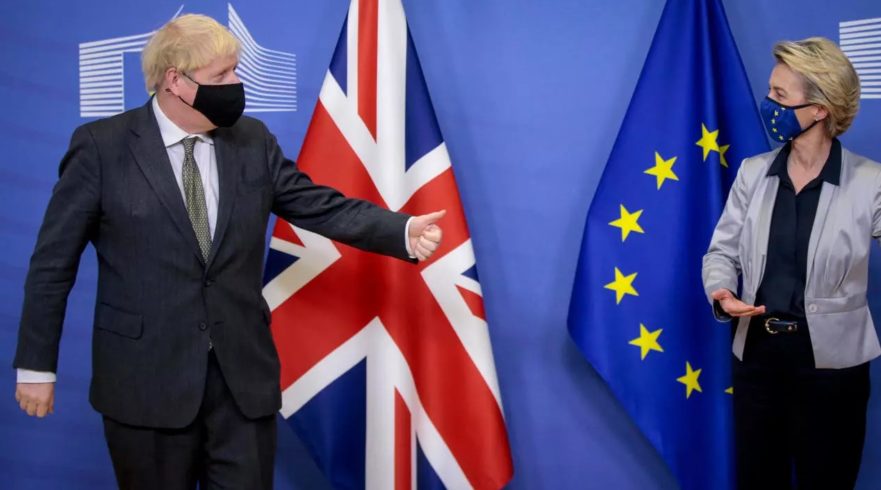 Is it Christmas yet?

Hardly anyone had expected this: Apparently, the EU and Great Britain are on the verge of agreeing on a Brexit deal. This made for a good finish on the stock markets just before Christmas. Hopes for an end to the months-long standoff over a Brexit agreement drove European markets in particular.

According to EU Commission sources, the European Union and the UK appear to be moving towards an agreement in trade talks. They said they were in the final stages of negotiations. Other sources said that the very difficult issue of fair competition had been resolved. On the second sticking point, fisheries, they were also very close.

The positive news also improved the mood on Wall Street. The Dow Jones closed around 0.4 per cent up at 30,129 points, while the market-wide S&P 500 rose by 0.1 per cent. Only the technology-heavy Nasdaq 100 fell slightly.

Investors were relatively unimpressed by President Donald Trump’s veto of the 900 billion Corona stimulus package passed by Congress. Only the global corona situation and weak US economic data weighed on the market today.

The Asian stock exchanges rose again on Wednesday. Japan’s leading index, the Nikkei, finally recorded a gain of 0.33 per cent to 26,524.79 points. The Chinese mainland also saw an upward trend, with the Shanghai Composite ultimately trading 0.76 per cent higher at 3,382.32 points. The Hang Seng closed 0.86 per cent firmer at 26,343.10 index points.

The fact that Donald Trump may want to refuse to sign the latest corona stimulus package had initially weighed on the market sentiment. Still, now the market is instead focusing on the fact that Trump wants a bigger package.

The European stock exchanges rose significantly once again before Christmas. The EuroSTOXX 50 ended the day 1.30 per cent higher at 3,542.95 points.

Uncertainty was caused by the new, even more contagious variant of the coronavirus and the ongoing tug-of-war over a Brexit agreement. Also, there was disappointing news from the USA: President Donald Trump has threatened to veto the Corona stimulus package passed by Congress. However, if he actually decided to do so, he could be overruled by Congress with a two-thirds majority.

On the foreign exchange market, both the euro and the British pound gained. Growing hopes for an agreement in the European Union (EU) trade talks and the United Kingdom supported over long stretches today. The euro rose to 1.2221 dollars in European afternoon trading, but then fell back somewhat in New York trading to 1.2180 US dollars.

Oil prices also benefited in European afternoon trading from increased hopes of a trade deal between the EU and the UK. North Sea Brent crude was up $1.23 in the evening to $51.30. The barrel price of US WTI oil rose by 1.19 dollars to 48.21 dollars.

The gold price was able to appreciate today after disappointing US economic data and other factors weighing on the greenback. In the end, the precious metal gold was traded for $1,873, which is about $10 more than at yesterday’s close.

Sentiment on the cryptocurrency market continued to be depressed after the SEC took a stab at the blockchain and FinTech company Ripple. Especially XRP continued its downward slide and is currently trading at $0.27, another 20 per cent less than on Tuesday. Bitcoin was also unable to continue its upward move and is currently stalling at around $23,000 while Ethereum lost almost 5 per cent to $584. Market observers believe that the digital assets market is now in the final stages for regulatory clarity (in the US) which could change things forever, featuring the cryptocurrency market as an actual new asset class. This hasn’t been done in many centuries, and many retail investors running away may miss out on an investment opportunity of a lifetime.

Germany’s Ifo Employment Barometer fell to 95.5 points in December from 96.7 in November. “The hard lockdown is leading to more restraint in hiring,” the Ifo Institute commented. “German companies are becoming more cautious about the labour market.” In industry, the barometer reading had risen, but still, no increase in the number of employees was expected, it said. The same was true in trade: here, too, the value had risen slightly, but no major changes in staffing levels were planned for the time being.

Consumer spending in the USA fell slightly in November, while household incomes took a hit. Compared to the previous month, spending fell by 0.4 per cent, according to the US Department of Commerce. Economists surveyed by Dow Jones Newswires had expected such a drop.

US consumer sentiment, on the other hand, brightened in December. The University of Michigan’s index of US consumer sentiment rose to 80.7 in the month-end survey from 76.9 at the end of November. Economists surveyed by Dow Jones Newswires had expected a reading of 81.0. It was 81.4 in the first survey in the middle of the month.

Contrary to expectations, the number of initial claims for US unemployment benefits fell significantly in the week ending 19 December, after having risen noticeably in some cases in the previous two weeks. Compared with last week, the number of claims fell by 89,000 to 803,000 on a seasonally adjusted basis, according to the US Department of Labour in Washington. Market analysts surveyed by Dow Jones Newswires had predicted a slight increase to 888,000.