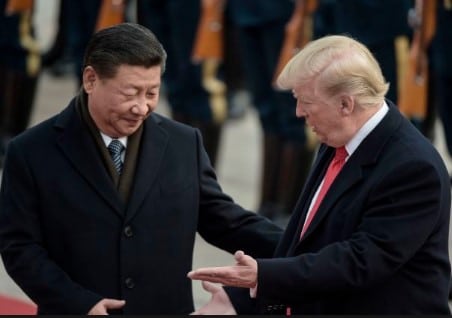 Investors can also look forward to rising prices on Wednesday. The Dax takes the impulse of strong US markets with it in the morning and remains on an upward trend. Several quarterly figures also have to be reviewed by investors.

The reporting season is also in full swing in the USA – and good figures from the Dow heavyweights Coca-Cola and United Technologies fanned the markets on Wall Street the evening before. The Dow Jones index closed 0.7 per cent higher and closed Tuesday trading not far from a new record high. The market-wide S&P 500 and the Nasdaq Tech Exchange index also closed higher.

Asia hopes for the end of the dispute

New hopes for a quick settlement of the US-China trade conflict are also leading to firmer prices in Japan this morning. The Nikkei index is currently climbing by around half a per cent. US diplomats reportedly travel to Beijing for talks on Monday.

What is the ECB doing?

The ECB’s interest rate decision in the early afternoon could, however, cause restraint on the floor in Germany. According to experts, the question “whether ECB boss Mario Draghi will announce or at least hold out the prospect of a resumption of bond purchases at this meeting” will be exciting, says portfolio manager Thomas Altmann of investment advisor QC Partners.

In the run-up to the ECB meeting, the euro is at least in a difficult position. The common currency is currently also generally suffering from a strong dollar; at 1.1140 dollars, the euro costs presently around half a cent less than the previous day. The “greenback” on the foreign exchange market is also benefiting from the US government’s agreement with the US Congress on a debt ceiling for the US budget.

Many major German groups already gave an insight into their quarterly balance sheets in the morning.

Deutsche Bank deep in the lows

In the second quarter, the worldwide slump in sales and expensive problems, not only with diesel, pushed carmaker Daimler into the red. All in all, the Stuttgart-based company posted a loss of around 1.3 billion euros attributable to its shareholders from April to the end of June, Daimler announced on Wednesday. Almost two weeks ago, Daimler had already anticipated that the quarter would be significantly worse than expected. After this, targets had already been revised for the current year downwards. At 42.7 billion euros, sales in the second quarter were five per cent up on the prior-year period. For CEO Ola Källenius, this is the first quarterly balance sheet since he took office two months ago.

The strong competition also affected the plastics manufacturer Covestro in the second quarter. The operating result (EBITDA) collapsed by 53.4 per cent to EUR 459 million, as the Group announced on Wednesday. Sales fell by 16.9 per cent to 3.2 billion euros. However, the Management Board confirmed its annual targets, which envisage volume growth in the low to mid-single-digit percentage range in the core business and an operating result of between 1.5 and 2.0 billion euros. In the worst case, this would be a halving compared to the previous year. Ebitda is expected to reach around EUR 410 million in the third quarter.

The credit card giant Visa continues to benefit from customers’ great spending pleasure. In the third quarter (to the end of June), net income increased by nearly one-third year-on-year to $3.1 billion (€2.8 billion). A significantly higher transaction volume boosted revenues by eleven per cent to 5.8 billion dollars. The results thus slightly exceeded expectations. However, the market reaction was cautious, and the share price fell after trading. In the year to date, however, the share price has already risen by 37 per cent.

According to insiders, Facebook has agreed to a billion-dollar settlement with the US regulatory agency FTC. This Wednesday, the Federal Trade Commission (FTC) will announce that the company will establish a privacy committee as part of the agreement, two people familiar with the events told Reuters news agency. It should also be ensured that the privacy of users is adequately protected in the future. The fine of five billion dollars imposed by the FTC – the highest fine demanded by the FTC – will be accepted by Facebook.

TI looks to the future with joy

Texas Instruments positively surprised the markets with an optimistic view of the third quarter. In the third quarter, the Group now expects earnings per share to be between $1.31 and $1.53. Analysts had calculated an average of only 1.37 dollars here. Texas Instruments expects sales of 3.65 to 3.95 billion dollars,” analysts had expected 3.84 billion dollars. In the second quarter, the US chip group recorded earnings per share of $1.36, four cents less than in the prior-year period. The company itself had promised 1.12 to 1.32 dollars. Turnover fell by 9.5 per cent to 3.67 billion dollars.