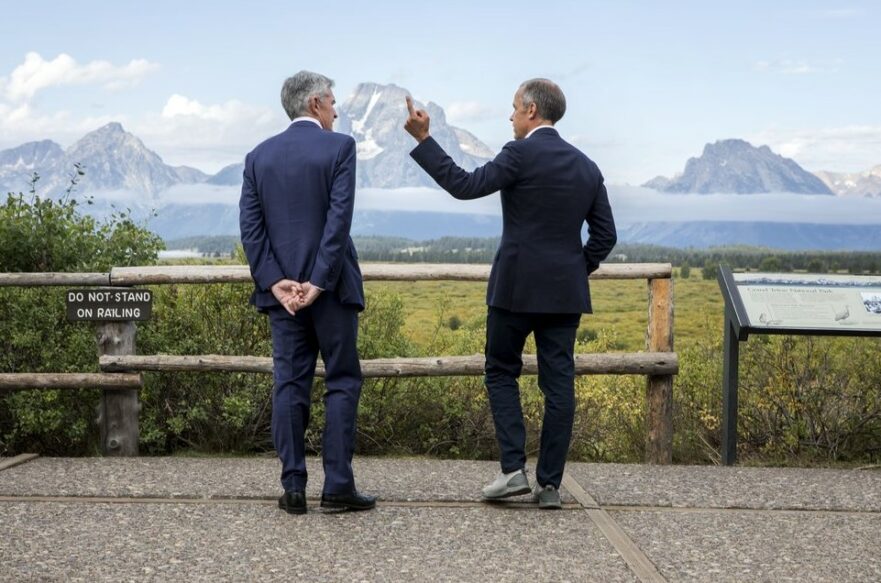 The most important topic at the moment is the upcoming central bankers’ meeting in Jackson Hole in the USA, which will be held as a video conference. On Friday, a speech by US Federal Reserve President Jerome Powell is on the agenda.

Investors expect the Powell speech to give them an indication of the future monetary policy of the world’s most powerful central bank. Given the renewed fear in the corona situation, investors’ fears of a possible tightening of monetary policy by the US Federal Reserve (Fed) had recently diminished again. Risk appetite had thus increased in recent days.

However, there is little doubt in the markets that monetary policy is set to change. The only unclear thing is how and when the Fed will tighten the reins. The first step will probably be to reduce the monthly bond purchases, known in the jargon as “tapering”.

The US stock markets were again friendly in the middle of the week, even though there was little movement. The Dow Jones opened the session slightly higher and was subsequently able to gain. It finally ended the trading session 0.11 per cent higher at 35,405.50 points. The NASDAQ Composite stayed in green territory, gaining 0.15 per cent to 15,041.86 points. However, the star of the day was not the Dow Jones or the Nasdaq but the market-wide S&P 500 benchmark index. The index surpassed the 4,500-point mark for the first time and set another record at 4,502 points.

Investors nevertheless exercised caution ahead of US Federal Reserve Chairman Jerome Powell’s speech at the central bank symposium in Jackson Hole on Friday. On the one hand, the marketing is noticing tapering signals, but on the other hand, we see that an economic slowdown is expected. On the economic side, durable goods orders fell less than expected in the US in July.

After the intense rally of the past few days, the Asian markets took a breather on Wednesday. According to market observers, investors have now returned to a neutral position. Investors are now increasingly focusing on the meeting of central bankers tomorrow, Thursday. Market participants are hoping for clues as to when and how quickly the US Federal Reserve will reduce its monthly bond purchases.

Investors on the European stock exchanges held back on Wednesday. The EuroSTOXX 50 was almost unchanged at the start of trading and did not move much until market close. In the end, it traded marginally 0.07 per cent higher at 4,181.12 index units.

In the German stock markets, things didn’t go so well. The DAX ended the day 0.28 per cent weaker at 15,860.66 points. The TecDAX started the day slightly lighter and slipped deeper into negative territory as it progressed. It ended the trading day with a loss of 0.52 per cent to 3,909.45 points. Following the record chase of the previous day, the MDAX also reached another record on Wednesday. The current all-time high is 36,304.63 points.

The IFO business climate index for August had a negative impact on the sentiment as the mood in Germany’s executive suits has deteriorated further.

The euro was again able to make some gains on the foreign exchange market. At 1.1772 US dollars, the euro approached the 1.18 dollar mark in New York trading. While stock investors are still not pulling on the handbrake despite the record series of some US indices, the dollar was not high on the agenda as a retreat in troubled times – as it has been in the past few days.

Oil prices continued to rise on Wednesday. The significant increases since the beginning of the week were thus extended somewhat. By 34 cents, the price of Brent oil moved up to 71.42 US dollars. WTI oil from the USA rose by 19 cents to 67.72 dollars.

The mood in the executive suites of the German economy continued to deteriorate in August. The Ifo Business Climate Index nose-dived to 99.4 (July: 100.7) points, as the Munich-based Ifo Institute, stated after its monthly survey of around 9,000 managers. It was the second decrease in a row. Economists surveyed by Dow Jones Newswires had only expected a decline to 100.3 points. “Supply bottlenecks for intermediate products in industry and worries about rising infection figures are weighing on the economy,” said Ifo President Clemens Fuest. “The decline was mainly due to significantly less optimistic expectations of companies. Concerns are growing in the hospitality and tourism sectors in particular.”

New orders for durable goods in the United States fell slightly in July. As reported by the US Department of Commerce, there was a decline of 0.1 per cent compared to the previous month. Economists surveyed by Dow Jones Newswires had expected a drop of 0.5 per cent. The previous month’s increase was revised down to 0.8 (preliminary: 0.9) per cent.