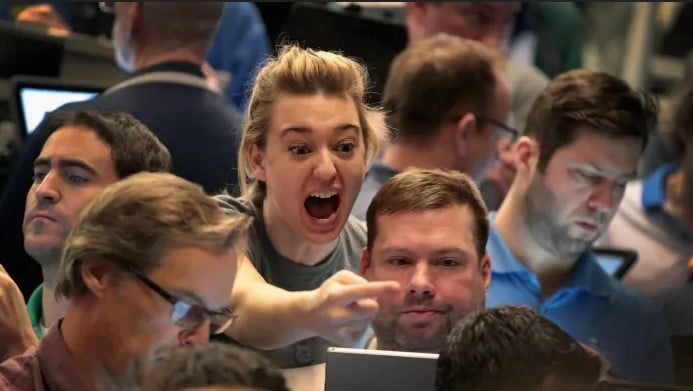 The vaccination hopes and the apparent change of government in the USA continue to inspire the confidence of investors on the trading floor – even if today, big price jumps were not on the agenda.

Although vaccinations against the coronavirus are in prospect, the immediate situation remains tense. Investors have therefore kept a low profile today given the threat of corona aggravation by governments.

Furthermore, the Thanksgiving holiday in the US also slowed things down. Just before tomorrow’s public holiday, market participants mostly kept their powder dry.

After the price jump on Tuesday, investors in the US markets took a breather on Wednesday. The Dow Jones Industrial ended the day with a loss of 0.58 per cent to 29,872.67 points. On the previous day, it had managed the jump over 30,000 points for the first time. The tech-index NASDAQ Composite, on the other hand, also gained ground over the day. Its closing level was 0.48 per cent higher at 12,094.40 points.

US investors held back on the extended Thanksgiving weekend, which started on Thursday. In contrast, the economic news reported before the stock exchange hardly caused any movement. The US economy recovered by 33 per cent in the third quarter of the year. However, investors are already looking ahead to the fourth quarter, which is expected to be very positive, primarily since the Christmas business traditionally drives the markets.

On the one hand, investors were pleased with the good performance of Wall Street the previous day, where the Dow Jones index climbed above the 30,000 mark for the first time. But on the other hand, the current corona wave continued to worry them, which is why many traders decided to take some chips off the table.

The European stock markets showed cautiously optimistic performance on Wednesday. The EuroSTOXX 50 ultimately closed with a small gain of 0.19 per cent at 3,514.47 points, after leading the same trend at the start.

Although the German stock index opened higher, it subsequently turned negative. In late trading, however, the Dax 30 was able to make up most of its losses, ending the day only 0.02 per cent lower at 13,289.80 points. In contrast, the TecDAX made significant gains after initially starting the day almost unchanged. Its closing level was 1.03 per cent higher at 3,049.68 points.

On the one hand, hopes on the European trading floors were also based on the rapid availability of corona vaccines and a smooth transition in the US presidency. On the other hand, the latest infection figures gave cause for concern. “However, lockdowns can always cause setbacks,” warned a market participant according to Dow Jones Newswires.

On Wednesday, the euro rose to its highest level in almost three months. At its peak, the common currency cost 1.1930 US dollars, the same price as at the beginning of September this year. Currently, the euro is only slightly lower at 1.1907 dollars. The euro gains were triggered by an abrupt weakening of the US dollar on the Forex market. With the rising stock market prices, the greenback was no longer in such high demand as a reserve lead currency. Moderate data from the labour market also fundamentally dampened the upside potential, which in turn benefited the euro.

Meanwhile, oil prices remain well supported and are higher than they have been since March. They are particularly benefiting from the prospect of economic normalization following the recent vaccine successes. North Sea Brent cost today 49 cent more and thus 48.35 dollars per barrel. The WTI price rose by 58 cents to 45.49 US dollar.

Gold stayed under pressure but was able to hold above the $1,800 round-mark, closing the day at $1,808 per troy ounce.

Cryptocurrencies saw the anticipated cataclysmic sell-off after days and days of positive movements. Bitcoin lost over 7 per cent on the day to $17,700, while many altcoins tumbled 20 per cent and more. XRP and XLM, for example, after shooting up more than 130 per cent in just one week, collapsed by 22 per cent to $0.52 and $0.17 respectively. Ethereum also went down significantly, losing 14 per cent to $520 per coin.

US economic output grew at a record pace in the third quarter and recovered from much of the pandemic losses, but is still below the 2019 level. As reported by the Department of Commerce in a first data revision, gross domestic product (GDP) for the year as a whole increased by 33.1 per cent over the previous quarter. The first estimate was thus confirmed – as expected by economists. The US economy contracted by 31.4 per cent in the second quarter and by 5 per cent in the first quarter. The US economy has thus made up for around two-thirds of the slump recorded in the first and second quarters. Nevertheless, economic output is still around 3.5 per cent lower than at the end of last year.

The number of initial jobless applications in the USA has increased again in the week ending November 21. Compared to the previous week, applications on a seasonally adjusted basis rose by 30,000 to 778,000, according to the US Department of Labor in Washington. Economists surveyed by Dow Jones Newswires, on the other hand, had predicted a decline to 733,000. In each of the preceding four weeks, the number of applications had dropped significantly by up to 55,000.

The mood of US consumers weakened in November. The index for consumer sentiment in the USA, which is calculated at the University of Michigan, fell in the month-end survey to 76.9 from 81.8 at the end of October. Economists surveyed by Dow Jones Newswires had forecasted a fall to 77.0.

US consumer spending rose in October while incomes fell. Compared to the previous month (September), spending increased by 0.5 per cent, according to the US Department of Commerce. Economists surveyed by Dow Jones Newswires had expected an increase of 0.3 per cent. A revised increase of 1.2 per cent (preliminary: 1.4 per cent) was announced for September.

The Ifo export expectations of the industry in Germany fell from plus 7.0 points to minus 2.1 points in November. “The mood among German exporters has deteriorated noticeably,” the institute explained. “The severity of the second corona wave in many European countries, in particular, is weighing on export business.

The computer group Dell is doing better than expected in the Corona crisis thanks to high demand for PCs, notebooks and tablets. “We’ve seen unprecedented demand for homework applications,” Dell CEO Jeff Clarke announced on Tuesday after the close of the US stock market when presenting the third-quarter figures. Operating income increased by around 35 per cent year-on-year to $1.1 billion. The PC division in particular recorded significant growth, with revenues from private customers up 14 per cent and sales to business customers up 5 per cent.

Salesforce.com recently negotiated the purchase of Slack Technologies, the operator of the Slack Messenger Service, according to informed sources. The provider of cloud computing solutions for companies would take a big step towards office communications if a takeover agreement were to be reached.

Slack currently has a market capitalization of 17 billion US dollars. It would be the largest acquisition in Salesforce’s history.

The prospect of a takeover by SAP’s competitor Salesforce gave the office communications service Slack a massive boost on the stock market on Wednesday. At the close of trading they gained 37.42 percent to 40.65 US dollars on the NYSE. The shares of Salesforce on the other hand reacted with a price loss of 5.43 percent to 246.68 US dollars.