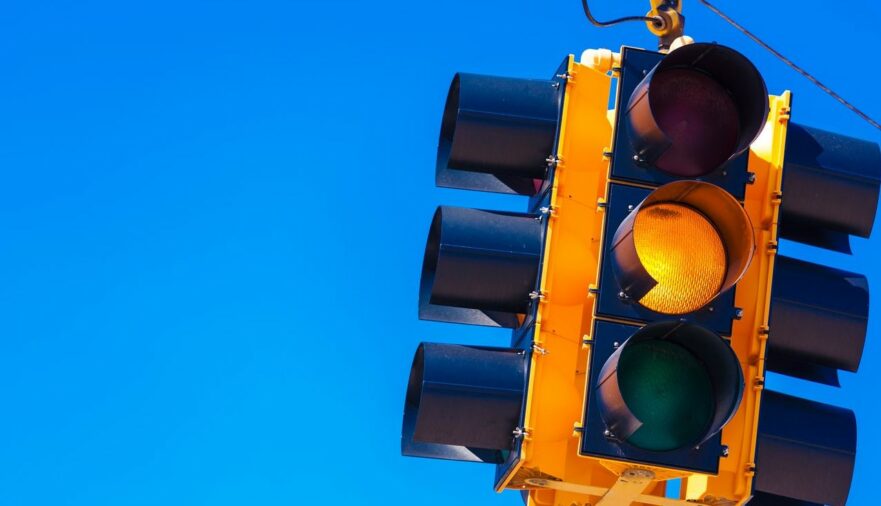 Once again, Powell and co left investors in uncertainty. The Fed clearly signalled the first rate hike in the evening but otherwise remained vague. Wall Street was unable to defend its gains, and other asset classes were also unable to hold on to initial gains.

When the US central bank unequivocally signalled a first interest rate hike in March, the stock markets initially extended their gains. After all, clarity is currently valued more highly in the market than the unpleasant fact of rising interest rates. But then, market participants found flaws in the central bankers’ communication. The markets are expecting up to four tightening measures totalling a whole percentage point in the current year. However, US Federal Reserve Chairman Jerome Powell failed to make any concrete statements on this point. The interest rate path remains open, Powell said. Observers also complained that there was still uncertainty about reducing the Fed’s massive securities holdings.

The US stock markets were highly volatile today due to the Fed meeting. The Dow Jones opened with visible gains and extended them as the day progressed. However, in late trading, monetary policy concerns increased and ultimately pushed the US leading index down by 0.38 per cent to 34,168.09 points. The tech index NASDAQ Composite gained even more at times after it had already climbed at the start. It also drifted downwards but ultimately salvaged a gain of 0.02 per cent to 13,542.12 points at the end of the day.

The interest rate decision was in focus on Wednesday. As expected, the monetary guardians left the key interest rate in a range of zero to 0.25 per cent and announced a rate hike “soon”. However, concerns about the speed of monetary tightening then caused investors to flee. Some of Fed Chairman Jerome Powell’s statements at the press conference after the rate decision are now being interpreted to mean that the US central bank could turn the interest rate screw at every upcoming meeting instead of up to four times this year as previously priced in.

At midweek, mixed signs were seen on the Asian stock exchanges. The Japanese benchmark index Nikkei lost 0.44 per cent to 27,011.33 points by the end of trading. On the Chinese mainland, however, the Shanghai Composite closed up 0.66 per cent at 3,455.67 points, while the Hang Seng exited the session 0.19 per cent firmer at 24,289.90 points in Hong Kong.

Despite negative cues from the US stock markets, partial gains were seen in Asia on Wednesday. However, investors were, on the whole, rather cautious ahead of the US Federal Reserve’s meeting in the evening.

The European markets recovered today, in some cases significantly, from the losses of the previous trading days. The EuroSTOXX 50 extended its initial gain and closed 2.12 per cent firmer in the evening at 4,164.60 units.

The DAX extended its initial strong gain even further and ultimately went into the close 2.22 per cent firmer at 15,459.39 points. The same positive trend was seen in the TecDAX, which improved on its early gains and ended the day 1.67 per cent higher at 3,411.32 points.

As everywhere else, investors’ eyes were on the USA and the Fed in the middle of the week.

The euro came under strong pressure on the foreign exchange market after the Fed’s announcements and fell by around half a US cent to 1.1240 dollars. A rapid rise in interest rates in the US would make the euro less attractive for investors and tend to weigh on the exchange rate.

New confidence in a revival of the global economy has given oil prices a significant boost today. For the first time since 2014, a barrel of North Sea Brent crude cost more than 90 US dollars at times. In the end, the barrel price for Brent stood at $89.63 and WTI at $87.11. Another recent price driver was the concern about possible supply restrictions in view of the Ukraine conflict.

The gold price dropped hard with the strengthening greenback and closed down more than $35 at $1,816 per troy ounce.

Initially, Bitcoin and co rose after the Fed announced to keep interest rates unchanged but had to give up all gains in late trading as the Fed came out too hawkish. Bitcoin closed down 0.9 per cent at $36,300, after climbing as high as $39,000, while Etehreum shed 0.5 per cent to $2,420. Binance Coin, Solana, and Polkadot dropped around 2 per cent, while Cardano (ADA) managed to post a gain of 1.6 per cent to $1.05. XRP remained unchanged at around $0.61, while most other altcoins posted significant losses.

The mood among German exporters improved significantly at the beginning of the year. The ifo index of export expectations rose to 17.4 points in January (December: 12.9), according to the ifo Institute. Accordingly, almost all sectors expected growth. The only exceptions were textile and clothing manufacturers, printers and the food industry. They expect declining foreign sales.

In the USA, sales of new houses have risen significantly more than expected. In December, they increased by 11.9 per cent compared to the previous month, as the Department of Commerce announced on Wednesday. Analysts had predicted an increase of only 2.2 per cent. In November, sales had risen by a revised 11.7 per cent.

Despite high inflation, the Bank of Canada has not raised its key interest rate. It remains at 0.25 per cent, according to a Bank of Canada statement published on Wednesday. Most analysts had expected this. However, some experts had already expected an increase in the key interest rate at this meeting. However, in the release, the central bank gave hints of a rate hike soon. “The economy has entered 2022 with considerable momentum, and a broad range of indicators now suggest that the slack in the economy has been made up,” the Bank of Canada wrote. The promise not to tighten financing conditions was dropped. The next interest rate decision will be made on 2 March.