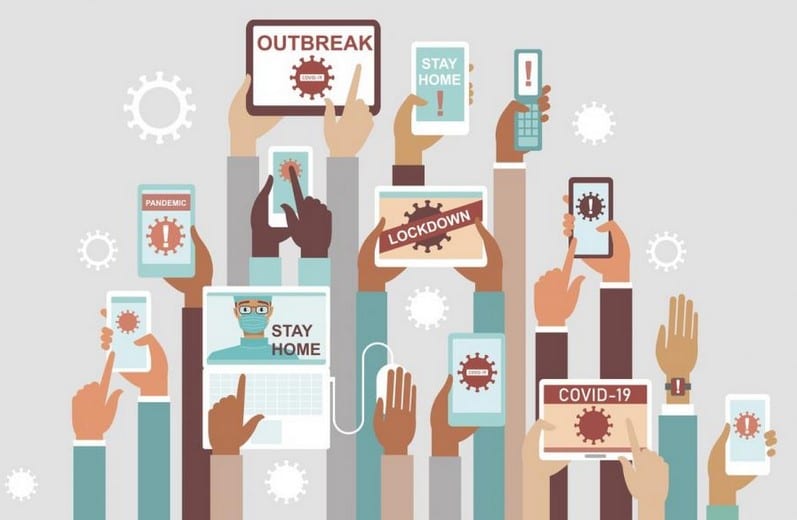 Once again, we are in a phase where investors have to keep their nerve and process many facts and figures. The nervousness and partially undecidedness are also reflected in the last trading days and hours’ price caprices.

One topic that contributed to today’s disillusionment and in part heavy price losses were economic figures that clearly show that the lockdowns continue to weigh heavily on the economy even if many investors would prefer not to notice or hear this.

Problems with vaccine supply also pushed the often positive company balance sheets into the background. This raises fears of an extension of the lockdowns and further delay in economic recovery. The risk of a higher rate of insolvencies and (private) bankruptcies during the prolonged restrictions on public and social life is also increasing.

Nevertheless, in their meeting minutes, the Fed stated that it is somewhat more confident about the economic development in the current year despite high corona risks.

The US stock market ran into difficult waters on Wednesday. Although the Dow Jones opened the day with only a small loss, it then slipped further and further. By the end of trading, it had lost 2.05 per cent to 30,303.17 points. The NASDAQ Composite index started already lower, but it also came under further pressure. It ended the day 2.61 per cent lower at 13,270.60 points.

As was already expected on the market, the US Federal Reserve left the key interest rate at an ultra-low level. Wall Street hardly reacted to this decision. The downward pressure was ultimately caused by Federal Reserve Chairman Jerome Powell’s speech, who was more confident about the future but did not expect the economy to recover until later in the year.

Besides, the reporting season was in full swing, which caused movement in individual stocks. Numerous companies had opened their books on Wednesday, with Apple, Facebook and Tesla following in the after-hours.

The Asian stock markets ultimately showed a mixed picture in the middle of the week. The Japanese benchmark index Nikkei rose by 0.31 per cent to 28,635.21 points by the close of trading.

On the Chinese mainland, the Shanghai Composite ended the session 0.11 per cent higher at 3,573.34 points. In Hong Kong, the benchmark index Hang Seng turned negative and closed 0.32 per cent lower at 29,297.53 index points.

After Tuesday’s losses, the Far East’s stock markets attempted to stabilise in the middle of the week. However, headwinds for higher price continued to come from the new, more infectious coronavirus variants.

Market participants also cited hurdles to US President Biden’s multi-billion dollar stimulus package as a reason why mid-week gains were meagre and in some cases could not be sustained. In China, according to market participants, there were also signals that the Chinese central bank wants to tighten the reins of monetary policy again.

The European stock exchanges fell sharply on Wednesday. The ups and downs on Europe’s stock markets thus continued. Although the EuroSTOXX 50 opened little changed, it subsequently fell deep into the red and ultimately ended the day with a significant discount of 1.43 per cent at 3,541.42 points.

The DAX, Germany’s leading index, also lost quite some ground in Frankfurt and ended the day 1.81 per cent lower at 13,620.46 points. The TecDAX initially fell after a barely changed start, but then turned positive shortly before the close of trading and closed 0.23 per cent firmer at 3,400.21 points.

Experts had already expected prices to fall slightly in pre-market trading. Among other things, many market participants remained on the sidelines before the Fed held its meeting in the evening. Tighter lockdowns, as well as worries about possibly more contagious virus variants, had recently taken the momentum away from many stock exchanges at record levels.

The faster introduction of the vaccine against the coronavirus in Great Britain than in the EU provided a tailwind for the pound sterling on the foreign exchange market. The currency rose to an eight-month high against the euro and was last still trading 0.1 per cent higher at 1.1307 euros. The euro also weakened against the greenback in the run-up to the Fed meeting. The European Central Bank (ECB) set the euro reference rate late this afternoon at 1.2114 (Tuesday: 1.2143) US dollars.

In the USA, nationwide inventories of crude oil fell significantly last week. Inventories fell by 9.9 million barrels to 476.7 million barrels, as the US Department of Energy announced in Washington on Wednesday. Analysts, however, had expected an increase of 1.5 million barrels. Oil prices then rose and remain at a high level. North Sea Brent oil traded at 55.95 US dollars, up 31 cents from Tuesday. US WTI light oil even increased by 52 cents to 53.13 US dollars.

Gold was under pressure again today and travelled as low as to $1,830 intraday before it was able to recover and close at $1,844 per troy ounce.

Cryptocurrencies remain under heavy selling pressure, despite its obvious beneficial factors that they could have on the global economy. The big issue continues to be regulatory unclarity and a struggle between the powers that are and may be. Bitcoin slipped under $30,000 but was able to move back up to $30,900, still losing 3.7 per cent on the day. Altcoins were hit even harder, or take longer to recover, with Ethereum losing 4 per cent to $1,285, Polkadot shedding a further 6 per cent to $15.80 and XRP retracing 4 per cent to $0.2560.

The German Institute for Economic Research (DIW Berlin) expects a significant decline in German gross domestic product in the first quarter in light of the Corona Lockdown. The economy is expected to shrink by 3 per cent from January to March after stagnating in the final quarter of 2020.

“Particularly in the services sector, value-added is falling significantly and is far below last summer’s level – and even then the pre-Corona level was still quite a way off,” said DIW head of economic research Claus Michelsen. “Currently, we assume that the hard lockdown will be maintained until the end of February and then gradually lifted – and that is the optimistic scenario. So the German economy has a long and rocky road ahead before it can grow again. However, the renewed lockdowns have further deteriorated the substance of many companies, which increases the risk of a wave of insolvencies – at least in the particularly affected sectors,” concludes the DIW.

In Germany, the ifo Employment Barometer fell to 95.0 points in January from 95.5 in December. “German companies’ hiring plans shrank slightly at the beginning of the new year,” the Ifo Institute said. “The lockdown is leading to more layoffs, especially in the retail sector.”

In France, consumer sentiment has fallen against the backdrop of a high number of new infections in the Corona pandemic. According to the statistics office Insee on Wednesday, the index value for the consumer climate in January fell by three points to 92 points. Analysts on average had expected only a slight decline to 94 points.