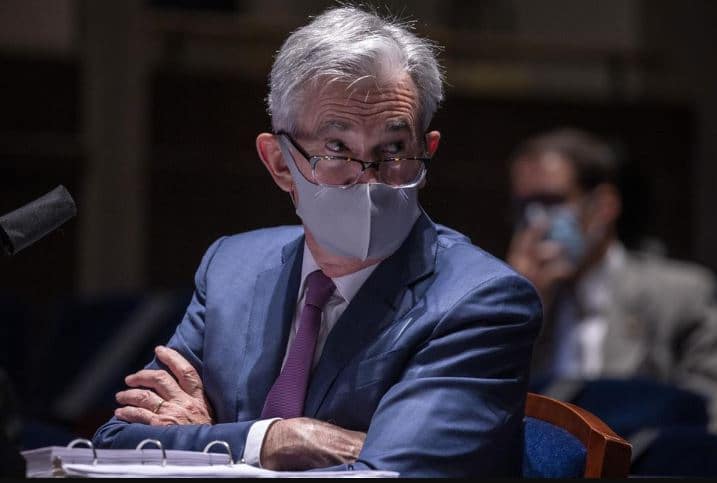 Investors and daytraders had been waiting for days for the Fed. Now the US Federal Reserve finally had its meeting and announced its decisions. It is not doing more for the time being but is keeping the door open for new crisis aid. This means that nothing new has been brought to the table, and the financial markets are reacting cautiously.

As expected, the Fed is keeping the key interest rate close to zero and the door open for new crisis aid. The Fed remains determined to use its “full range of tools” to cushion the economic consequences of the corona crisis, the monetary watchdogs confirmed on Wednesday evening in a press conference. Growth and employment have picked up again somewhat since the peak of the pandemic in the US, but are still well below the level at the beginning of the year, the Fed warned. Given a wave of new corona infections in the US, the Fed has only recently expanded the number of its credit programs and extended them until the end of the year.

Federal Reserve Chairman Jerome Powell also announced that he would maintain the current pace of bond purchases and use all instruments to support the US economy.

Hopes for further economic stimulus injections by the US government were not fulfilled for the time being though. A problematic struggle is looming in Congress over a new corona aid package. Representatives of the government and leading Democratic Congress members tried to resolve points of contention. Time is short because, on Friday, additional state support for people who lost their jobs in the Corona crisis will expire.

Wall Street traders reacted cautiously optimistic after the FOMC meeting and pushed the US indices slightly up. The Dow Jones leading index rose 0.62 per cent to 26,542.04 points. The NASDAQ Composite technology index closed 1.35 per cent higher at 10,542.94 units.

Wednesday also saw a series of quarterly figures to digest. For example, eBay and Starbucks presented their balance sheets for the past quarter after-hours in the evening before. GE, Boeing, Aphria, Visa and Spotify followed later in the day.

Asia’s stock markets did not find a common direction on Wednesday. While the Japanese leading index, the Nikkei 225, closed 1.1 per cent lower at 22,397 points, share prices in China went up. The CSI 300 on the Chinese mainland stock exchanges, rose by 2.0 per cent to 4,660 points in late trading. Hong Kong’s Hang Seng rose by 0.4 per cent to 24,860 index units.

Despite strict precautions, China is experiencing the highest number of new daily infections in three months. Although the People’s Republic has the virus mainly under control, the Health Commission reported around 100 new cases in Beijing on Wednesday. More significant outbreaks are reported in the northwest region of Xinjiang and Dalian. From the northeastern Chinese port city, the traveller’s infections have spread to nine other cities – including Beijing, which has had its first case in three weeks.

The Dax 30 oscillated indecisively between profit and loss for most of the day. At 12,822 points, it dropped 0.1 per cent from Xetra trading. In contrast, the TecDAX gained 0.73 per cent and closed at 3,074.89 index units.

Investors held back in the middle of the week. One reason was the high level of uncertainty due to the continuing fear of a second wave of infection. Besides, the interest rate meeting of the US Federal Reserve Bank in the evening moved into focus.

In the foreign currency market (Forex), the reaction to the Fed meeting was stronger. The US dollar continued to weaken, while the euro was inching in closer to the 1.18 US dollar mark. The Dollar Index, which reflects the exchange rate against other major currencies, fell 0.4 per cent to 93.42 on Wednesday, its lowest level in two years.

Oil prices rose slightly on Wednesday. Increased inventories in the USA supported crude oil prices. According to the Department of Energy, crude oil inventories fell by 526.0 million barrels. Analysts, however, had expected an increase of 0.5 million barrels. Already on Wednesday evening, the American Petroleum Institute (API) reported increased stocks. At $43.73, a barrel of Brent crude cost 51 cents more than the previous day, while West Texas Intermediate (WTI) rose by 27 cents to $41.30.

Gold and silver were trading in very narrow ranges throughout the day until the Fed meeting. Then, volatility skyrocketed once again, sending the two precious metals on another roller-coaster ride. The gold price first dropped below $1,942 before it shot up to $1,980. Later, it consolidated around $1,962. Similarly, the silver price swung between $25 and $23.30 within minutes and ended almost unchanged on the daily chart at $24.30.

Cryptocurrencies held steady at their increased price levels, and some were even able to grow their recent gains further. Bitcoin and Ethereum consolidated at $11,000 and $320 respectively. XRP, on the other hand, gained 0.9 per cent to now $0.2424.

The prices of goods imported into Germany declined also in June, albeit much more slowly than in the previous month. The Federal Office of Statistics announced in the morning that import prices had fallen by 5.1 per cent year-on-year. Analysts had expected this decrease.

Deutsche Bank not too bad

The corona crisis left its mark on Deutsche Bank in the second quarter. The bottom line – i.e. after deducting interest payments for subordinated bonds – was a loss of 77 million euros, mainly due to higher risk provisions for bad loans.

The bank posted a pre-tax profit of 158 million euros, in part because investment banking expanded. Analysts interviewed by the bank had expected a lower profit on average. In the second quarter of 2019, Deutsche Bank had made a loss of more than three billion euros, at a time when high costs for the restructuring of the group had been incurred.

The Spanish bank posted a record loss of more than eleven billion euros due to write-downs in the second quarter. Due to the deterioration of the global economy in the wake of the corona crisis, the second-largest bank in the eurozone had to write down 12.6 billion euros, among other things on previous takeovers.

This resulted in a loss for the second quarter of 11.1 billion euros. Without this special effect, Santander would have reported a profit of EUR 1.5 billion, the bank said. The core capital ratio improved by 26 basis points to 11.84 per cent. Banco Santander is one of the largest banks in the eurozone.