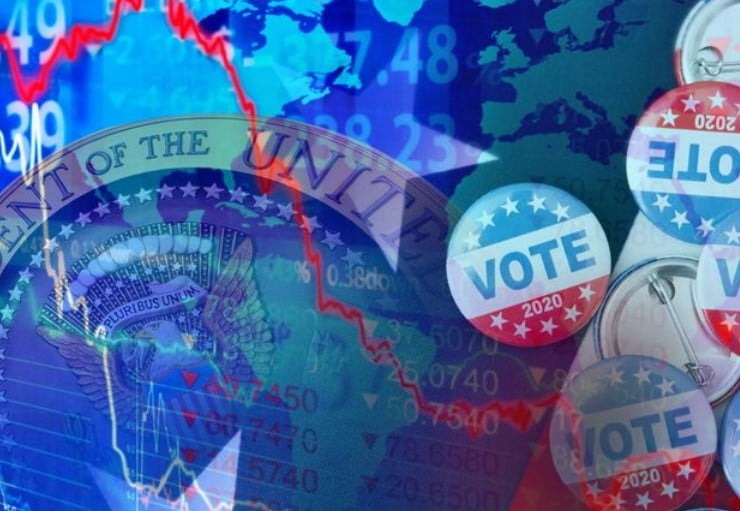 As expected, the topic of the day was the TV mud-slinging of two over 70-year-old US presidential candidates, which may have further damaged the already tarnished reputation of the country. However, more importantly, the worsening corona crisis and the threat of a no-deal Brexit continue to cause much skepticism in the market. Only the hope for a dynamic turnaround after the pandemic and the genuinely remarkable extraordinary boom in US tech stocks continue to justify the high prices.

The presidential debate heightened market concerns that President Trump would not accept a potential defeat so easily. This weighs on stock markets worldwide and represents the most significant risk to the rally on the US stock markets. Nevertheless, there were some positive signals today, which meant that Wall Street was able to gain ground after all.

Wall Street trading was firmer in the middle of the week.

Yesterday’s television debate between presidential candidates Joe Biden and Donald Trump had little impact on investor behaviour. However, the fact that Trump, when asked, did not declare that he would accept the election results in the event of a defeat created uncertainty. Thus, a peaceful transfer of power remains a risk. Meanwhile, surprisingly upbeat economic data boosted share prices.

In Asia, the stock markets developed unevenly. While prices in Japan fell again, they continued to rise in China and Hong Kong.

The CSI 300, which comprises the 300 most essential shares on the Chinese mainland stock exchanges, gained just over half a per cent, thanks in part to positive economic data. The Hang-Seng Index in Hong Kong rose by 0.5 per cent. In Japan, by contrast, the Japanese leading index Nikkei 225 closed 1.5 per cent lower at 23,185 points.

The European stock markets posted losses on Wednesday. The EuroSTOXX 50 ultimately turned negative and closed 0.6 per cent lower at 3,193.61 points.

The euro gave up a smaller portion of its gains made so far this week in Forex trading on Wednesday. In New York, the common currency was last traded at 1.1719 US dollars. Previously, the euro had temporarily risen to $1.1755 in Asian trading. The European Central Bank (ECB) set the reference rate at 1.1708 (Tuesday: 1.1702) dollars.

Oil prices showed a mixed picture on Wednesday after heavy losses. At 40.85 US dollars, a barrel of North Sea Brent costs 18 cents less than the previous day. In contrast, the US West Texas Intermediate (WTI) variety rose by 37 cents to 39.66 dollars. In addition to positive economic data out of the USA, the development of the US oil reserves also provided some impetus. In the past week, the stocks had unexpectedly fallen, by 2.0 million barrels to 492.4 million barrels. Analysts had however counted on an increase by 1,0 million barrels. Decreasing oil reserves usually support oil prices.

The gold price went a rollercoaster ride today and finally slipped back into the red in the New York trading session. After the $1,900 mark was once again reached, the price of gold eventually fell to $1,887 per troy ounce. However, a re-test of the $1,900 mark could be due again tomorrow.

China’s industry grew in September thanks to an upswing in exports. The official purchasing managers’ index for the manufacturing sector (PMI) rose from 51.0 in August to 51.5 in September, according to data released by the National Bureau of Statistics on Wednesday. This puts the barometer above the 50-mark, which separates monthly growth from contraction. Analysts had expected it to only rise slightly to 51.2. The data signals that China’s industrial sector continues to move toward pre-pandemic levels as pent-up demand, stimulus-related infrastructure expansions and surprisingly robust exports drive a recovery.

In the wake of the pandemic, US economic output slumped by almost a third in the second quarter. According to the data in the third publication, gross domestic product (GDP) shrank by 31.4 per cent on a year-on-year basis, after the second publication had reported a minus of 31.7 per cent. Economists had expected this figure to be confirmed. As the US Department of Commerce further announced, the deflator used as an alternative measure of inflation for personal consumer spending (PCE) fell by an annualized 1.6 per cent (previous quarter: plus 1.3 per cent) compared with last quarter. The US Federal Reserve, in particular, favours the PCE deflator in its monetary policy analyses.

The economic data of the private US employment agency ADP, however, were surprisingly positive. The ADP reported an increase in employment of 749,000 new jobs, while experts expected an increase of only 649,000. At 62.4 points, the Chicago Purchasing Managers’ Index for September also exceeded the forecast of 52.0 points, and the series of very robust figures also continued on the housing market. Pending home sales in August were up 8.8 per cent on the previous month, with only a 3.1 per cent increase expected.

The Palantir share was listed on the NYSE at an initial price of 10.00 US dollars. The reference price was set at 7.25 US dollars on Tuesday. The share finally closed trading at $9.50, up 31.03 per cent.

Palantir expects to make a turnover between 1.05 billion and 1.06 billion dollars in the current year, which would correspond to a growth of over 40 per cent compared to the previous year. The company specializes in data analysis and cooperates a lot with security authorities and secret services. This is one of the reasons why Palantir has long kept a low profile in terms of business and customers.

Covestro takes over part of DSM

The synthetic materials group Covestro is taking over the Resins & Functional Materials business unit from the Dutch chemicals company DSM for EUR 1.61 billion. The integration of RFM will increase Covestro’s sales by around EUR 1 billion and EBITDA by EUR 141 million, the Dax company announced on Wednesday. The group also hopes to achieve lasting synergy effects, which should amount to around EUR 120 million annually by 2025. The acquisition is to be completed in the first quarter of next year. Covestro intends to finance the acquisition in part through a capital increase, which should generate proceeds of around 450 million euro.