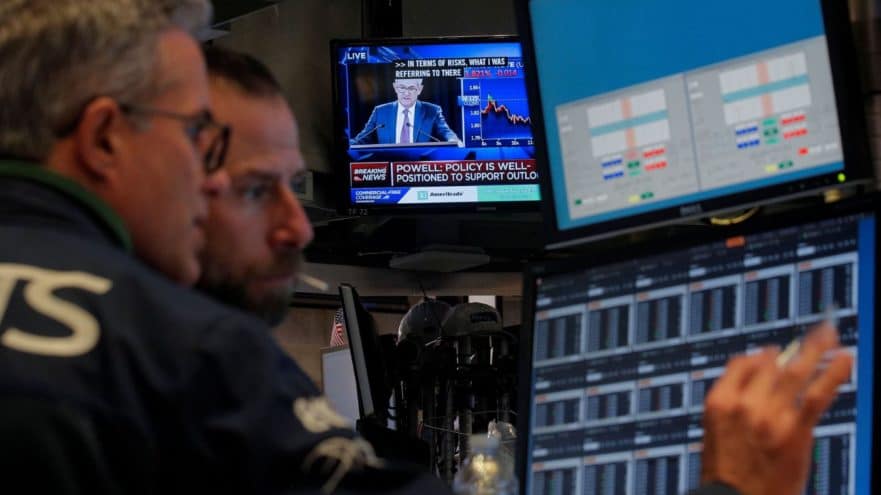 Fed President Jerome Powell has delivered: As expected, the US Federal Reserve has lowered its key interest rate for the third time in a row and at the same time signalled its readiness for an (interest rate) pause. On Wednesday, the monetary authorities cut the key monetary policy rate by a further quarter-point – to the new range of 1.5 to 1.75 per cent. At the same time, the Fed changed a passage in the accompanying text to the interest rate decision that had previously signalled its willingness to make further cuts.

Following the Fed’s decision, the US equity market was ultimately able to post gains.

The Dow Jones remained close to zero after a slow start. At the end of trading, however, it was able to work its way up to green ground and closed 0.43 per cent higher at 27,186.69 units. The NASDAQ composite also barely made any headway at first. At the closing bell, however, it gained 0.33 per cent to 8,303.98 points.

New US economic data showed that there is no reason for further rate cuts in the near future. The US gross domestic product grew at an annualized rate of 1.9 per cent in the third quarter while economists had predicted a plus of just 1.6 per cent. Good figures also came from the labour market. According to the ADP survey, US companies created 125,000 new jobs in October – 5,000 more than forecast. However, the increase in employment for September was subsequently revised from 135,000 to 93,000.

By midweek, the Asian stock markets will weaken.

Investors mostly held back and waited for the US interest rate decision in the evening.

The EuroSTOXX 50 was slightly lower at the start of trading. Subsequently, it was also in the loss zone, where it finally ended the day with a minus of 0.05 per cent at 3,620.29 index points.

Germany’s leading index, the DAX, opened trading with little movement but fell slightly in the end. It closed 0.23 per cent lower at 12,910.27 points. The TecDAX had already been somewhat weaker at the start of trading and remained in the red for most of the day. At the close of trading, it managed to return to the previous day’s end and went into the evening with a plus of 0.06 per cent at 2,811.46 units.

In addition to other quarterly reports, including those of Deutsche Bank and Bayer, the US Federal Reserve, in particular, was the focus of attention in the middle of the week.

The surprisingly high US economic growth boosted the dollar. The dollar index, which measures the world’s leading currency against other major currencies, jumped to a daily high of 97.73 points. In return, the euro fell to 1.1118 dollars.

The price of gold took a deep dive, as expected after the Fed decision to cut interest rates further was announced. However, it rebounded sharply to $1,495 after the Fed hinted to further cuts in the near future.

Oil prices further declined on Wednesday. A barrel of the Brent variety currently costs $60.49 while WTI stands at approximately $54.90.

The leading cryptocurrencies declined in value slightly this Wednesday. A Bitcoin is currently valued at $9,200. One Ethereum costs $183 and one XRP $2970.

On the Brexit side, things have calmed down. The British House of Commons passed a law in the evening according to which a new parliament is to be elected in December. The opposition Labour Party had given up its opposition to the vote after, in its opinion, the danger of an unregulated Brexit no longer exists. The announcement of new elections in Britain on Wednesday drove the pound sterling. It rose to $1.2880 from $1.2860 a year earlier. Investors hope that the move will lead to a way out of the Brexit drama.

The Deutsche Bank share slipped by almost six per cent at noon. The bank again posted a loss in the last quarter due to its restructuring of the group. The bottom line was a deficit of 832 million euros, as the largest German financial institution announced on Wednesday. In the second quarter, the bank had posted a loss after tax of 3.15 billion euros. “The transformation is in full swing, with tangible progress on the cost side and in reducing risk,” said CEO Christian Sewing. All four core business areas of the bank had been operationally profitable in the past quarter but had to post significant declines in earnings.

The French energy group earned significantly less in the third quarter due to lower gas and oil prices. Profit shrank by almost a quarter to around 2.9 billion euros. On the other hand, production in the third quarter rose by 8.4 per cent to a record level of over three million barrels of oil equivalent per day. Total shares fell slightly.

The Japanese entertainment and electronics group has raised its forecast for the year following surprisingly strong profit growth in the third quarter. According to this forecast, the Executive Board is aiming for a profit of 840 billion yen (6.9 billion euros) in 2019 instead of 810 billion. In the period from July to September, operating profit rose by 16 per cent to 278.96 billion yen, exceeding market expectations of 235.13 billion yen.