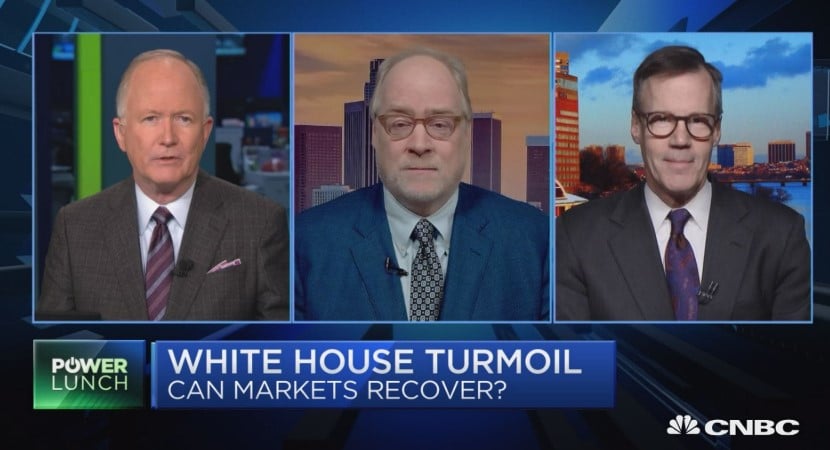 US President Donald Trump has tweeted with investors about the trade dispute with China. However, the Fed’s expected rate cut on Tuesday prevented the Fed from making any major losses.

On the stock market, a Fed interest rate cut of a quarter of a percentage point is considered safe. The reason for this step is not the US economy, said Marc Chandler, chief investment strategist of the brokerage house Bannockburn. Instead, it is regarded as a hedge against a possible slowdown in growth.

Meanwhile, Trump warned the government in Beijing against a delaying tactic at the start of a new round of negotiations to settle the customs dispute. Otherwise, the country could end up without a trade agreement with the USA. Shortly afterwards, however, he announced that the talks were going well.

Sell-off on the German stock market

On day one after the big sell-off, at least a stabilisation of the Dax at a lower level is indicated. The situation remains tense, however, as the air for export world champion Germany becomes thinner.

This was made clear by US President Trump’s recent warning to China, in which he warned Beijing leadership not to play for time. On Wall Street, too, the tightening of Trump’s tone caused some irritation, as the US Federal Reserve’s interest rate cut, which is expected in the evening (starting at 8 p.m. CET), is otherwise fixed.

Free markets worldwide are particularly crucial for Germany, the world’s leading exporter. Otherwise, the “Made in Germany” business model is vulnerable, as yesterday’s trading day made clear. Germany’s leading index fell by almost 2.2 per cent to 12,147 points. That was the biggest daily loss in half a year.

“The picture of the DAX has clouded over with yesterday’s price losses. In particular, the increasing number of negatively received company figures had a negative impact on sentiment,” write Helaba’s experts in their daily outlook.

In Germany, too, investors are of course anxiously looking to Washington, while at the same time the corporate reporting season continues with a new flood of figures. After the disillusionment of the previous day, investors do not have much time to lick their wounds. The Dax is expected to be slightly better in the first early indications.

The euro is stable at 1.1155 dollars in the morning trading hours, the British pound at 1.2165 dollars in early business is also little changed but at a weak level. The foreign exchange market has already given a clear answer to the emerging crash price of new prime minister Boris Johnson with regard to Brexit. The gold price moved higher above the $1,430 mark.

Finally some good news for Bayer. The pharmaceutical company from the Dax has received the green light from the US health authority FDA for its prostate cancer drug Darolutamid. Bayer announced that the approval had been granted under an accelerated procedure three months before the expiry of the deadline.

“The results show that darolutamide significantly improved survival without metastasis.” The Leverkusen-based company is developing the product in collaboration with the Finnish biopharmaceutical company Orion. Approvals have been applied for in the European Union, Japan and other health authorities.

The European aircraft manufacturer Airbus from the MDax more than doubled its profit in the first half of the year. Adjusted earnings before interest and taxes (EBIT) rose to EUR 2.53 billion (previous year: EUR 1.16 billion), as the company announced in Paris on Wednesday.

The reason for this is the ramp-up of the new versions of the A320 family with more efficient engines. Also, the A350 is approaching break-even. Net income rose to EUR 1.2 (0.5) billion. Group sales increased by 24 per cent to 30.9 billion euros. Airbus confirmed its target of increasing EBIT by around 15 per cent this year.

Strong growth in the first half of the year and a promising pipeline have made the provider of construction planning software more confident for 2019. The Management Board raised its annual targets and now expects sales between 200 and 220 (previous year: 136.9) million euros instead of 180 to 200 million euros.

Natural catastrophes and the restructuring of corporate client business added to the world’s second-largest reinsurer, Swiss Re, in the first half of the year. The bottom line was a profit of USD 953m, five per cent less than a year earlier, as the rival of world market leader Munich Re announced in Zurich on Wednesday. Solid business with equities and bonds cushioned the high burdens. After a weak first quarter, analysts had expected a significantly stronger drop in profits.

Group-wide, Swiss Re increased its net premiums and fee income by eight per cent to USD 18.2 billion. In property and casualty business, however, income was not sufficient to cover expenses for claims, administration and distribution. The combined ratio deteriorated from 92.9% to 100.5% due to flooding, hail and storm losses in Australia and the flight ban on Boeing’s medium-haul jet 737 Max.

The South Korean group earned significantly less in the second quarter due to weaknesses in the memory chip business. Operating profit fell by 56 per cent to the equivalent of a reasonable five billion euros. The company had already predicted this result at the beginning of the month. The memory chip area is in a downturn after two boom years. Semiconductor prices are falling because, for example, smartphones are less in demand. In the second half of the year, however, demand for memory chips should rise, Samsung announced.

Shares in the Apple smartphone group rose by around 4.5 per cent on the Nasdaq after the close of trading. Although the Group’s figures for the past quarter show a significant year-on-year decline in profits, they were better than expected.

Apple offset declines in smartphone sales with better sales of other products and services, resulting in one per cent revenue growth to $53.8 billion in the third quarter ended June. analöysetn had expected only $53.3 billion. The bottom line was that Apple earned a good ten billion dollars, a decline of around 13 per cent year-on-year.

The iPhone remains the Group’s most important product. For the current quarter, Apple has forecast sales of between 61 and 64 billion dollars. The figure for the prior-year quarter was 62.9 billion dollars.