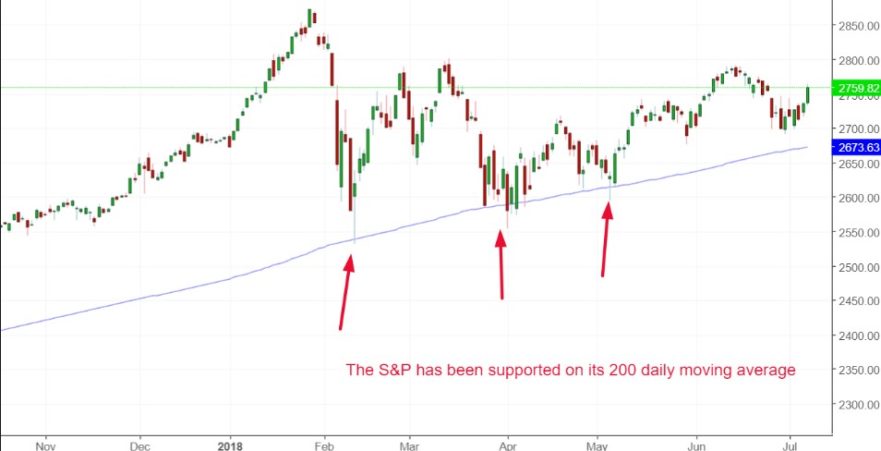 Chart technicians have been aware of the importance of the 200-day line for decades. But private investors can also use this chart trading indicator. If you follow a few simple rules, you can achieve a significant increase in return.

The 200-day simple moving avergae (SMA) is probably one of the simplest and best-known charting aids and trend signals. The original purpose of the indicator was to smooth out the often wild price fluctuations of stocks or indices to make the primary trend more visible.

The 200-day SMA is considered as an even more important trend indicator that, when the 50-day simple moving average crosses to the downside of the 200-day SMA, trend analysts speak of a “death cross”. Death cross, because the crossing of these two importand trend lines is signaling a significant bear market in an equity. On the other hand, if the 50-day SMA crosses over to the upside of the 200-day trend line, the event is referred to as a “golden cross” because we speak of a golden time where prices are highly likely to climb.

The calculation already shows this: in its pure form, the 200-day line is determined by calculating the arithmetic mean of the closing prices of the past 200 trading days for each day and then linking the individual average prices with each other.

This line thus describes the moving average of the past 200 trading days. This means that it virtually follows prices and therefore belongs to the group of trend-following indicators.

“The trend is your friend”

These have always attracted a lot of attention in chart technology, after all, the probably most important rule of technical analysis is: “The trend is your friend”. Or, to say it with the expert Wieland Staud of Staud Research: “The really big money is not earned in the daily in and out, but in the consistent riding of long trends”.

READ ALSO
How to invest in Gold

But what exactly does this mean in the case of the 200-day line? The rule of thumb is: If the observed index or the selected stock, commodity, etc. climb above the moving average, which in this case acts as a resistance line, then it is a buy. Investors can assume that the price will continue to rise.

If, on the other hand, the price breaks through the 200-day line, which in this case represents a support line, from top to bottom, then it is time to sell. The price should continue to fall.

Many investors may now wonder why the moving average of the past 200 days is being observed, rather than the 137-day line. Quite simply because of this: in backtesting, the 200-day line has proven to be a particularly valid indicator.

The danger of erroneous signals

Because it is familiar even to fundamentally oriented market participants, the psychological effect of the 200-day line alone is enormous. Besides, unlike many other technical indicators and aids, it impresses with its great simplicity.

However, these advantages are offset by numerous disadvantages: The danger of erroneous signals, for example, is not to be ignored with the 200-day SMA strategy, which often falls short of the mark. At the beginning of 2002, for example, the Dax only surmounted the 200-day line for a short time before falling back again.

Keep an eye on transaction costs

In May, July and August 2010, the Dax briefly broke through the 200-day line from top to bottom – only to regain it a few days later. Investors who had strictly followed the 200-day line as a signal for buying or selling would have lost a lot of money with this strategy.

Also, this strategy is extremely complex. Investors may well be forced to trade once a month on average in a volatile year. In addition, depending on the broker, high transaction costs are incurred with every sale or purchase, which in turn reduce the profit.

Many technical analysts, therefore, use a more refined, sophisticated variant of the strategy described above. To simply buy or sell is too flat-rate for them, depending on whether a price is quoted above or below the 200-day line. The direction of the line must also be taken into account in order to identify a clear trend.

Thus, if the 200-day line rises again after a bear market and the price quotes above it, then this is a definite buy signal. The long bull market between 2003 and 2008 would thus have taken investors in its entirety.

If, on the other hand, the 200-day line turns down again after a bull market and the price is quoted below it, then it means selling. Investors who would have followed this rule would have exited the market at the end of 2000 and the beginning of 2008.

This would not only have avoided the worst price slumps after the bursting of the dotcom bubble and the outbreak of the financial crisis. Courageous investors could even have made profits by betting on a falling market via certificates or other derivatives.

There are even more indicators

The orientation towards the 200-day line according to this more sophisticated variant thus offers private retail investors a simple tool to check whether they are missing an important trend or an important trend reversal. At the same time, this strategy offers them clear rules for entry and exit.

However, it would be too one-dimensional to orient oneself only to the moving average of the 200-day line. The 200-day SMA is just too lazy for that. Investors would miss out on a lot of performance if they only followed this trend. Technical analysts, therefore, always consider a whole bundle of indicators in their investment recommendations.

Not to be applied in sideways markets

The pure 200-day method is recommended as an investment strategy for private investors, especially in the case of pronounced market trends. In a volatile sideways movement, on the other hand, the risk of false signals is increased, and the costs of buying and selling eat up profits.

Most sophisticated investors use the 200-day simple moving average in conjunction with other chart signals, for example shorter-term moving averages to show not only the primary market trend but to also assess the strength of this trend as indicated by the separation between moving average lines.