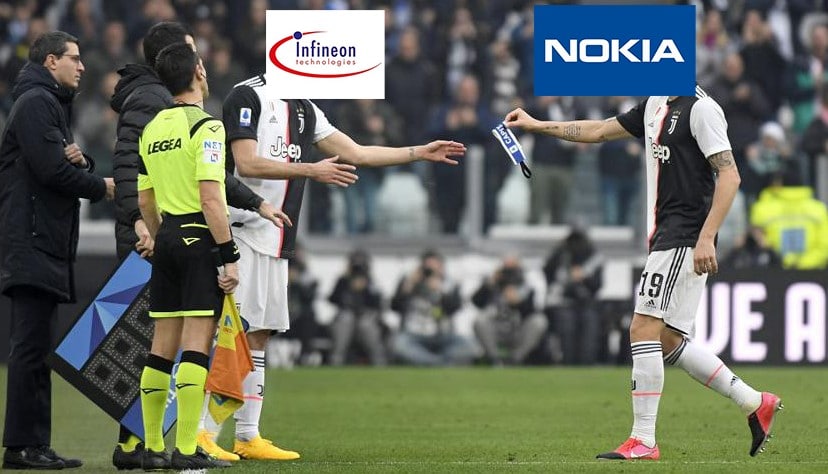 Infineon in, Nokia out

As expected by market experts, the German chip manufacturer Infineon replaces the Finnish network supplier Nokia in the Eurostoxx 50. The index provider Qontigo justified the move in a late Monday evening statement with the so-called fast-entry rule. According to this rule, a share must make it onto the index provider’s shortlist and rank at least 25th in terms of free float.

German companies are also affected by changes in the much larger Stoxx Europe 600. In future, the mail-order medicine retailer Shop Apotheke will be represented there. Three German companies will have to leave the index: Varta, Adler Group and Telefonica Deutschland. All changes will be implemented on 22 March.

Financial services provider Hypoport has disappointed investors’ expectations in the Corona year despite significant growth in revenue and operating profit.

According to preliminary calculations, revenue also fell short of the company’s targets, despite an increase of 15 per cent to €387 million, the company announced in Berlin on Friday after the stock market closed. The management had forecast 400 to 440 million euros. The operating result (Ebit) increased by 10 per cent to about 36 million euros and was thus rather at the lower end of the forecast range of 35 to 40 million euros. The share price came under significant pressure on Monday.

In the final quarter, Hypoport again reported double-digit percentage growth in revenue and EBIT. The company will present details as planned on 15 March. With a market capitalisation of around €3.6 billion, the loan and insurance broker is valued higher than MDAX-listed Aareal Bank (approximately €1.3 billion) and Deutsche Pfandbriefbank (€1.3 billion) combined. At Hypoport, everything revolves around digitalisation. The holding company, which is based in Lübeck and operates from Berlin, is one of the big players in the German fintech sector.

Hypoport’s shares more than halved their almost 11 per cent initial loss in trading today. In the evening, the financial services provider’s shares were only 3.96 per cent lower at €558. However, they were still the bottom performer in the SDAX, which was overall up by 1.8 per cent.

The IT service provider CANCOM intends to pay its shareholders a dividend of 0.75 euros per share for the past year. This is 50 per cent more than the company paid out for the previous year at 0.50 euros per share. With this increase, CANCOM SE is reportedly taking account of the positive business development.

The MDAX and TecDAX-listed company closed the 2020 financial year with a strong fourth quarter and exceeded its forecast for operating profit.

Daimler and the Swedish manufacturer Volvo will in the future work in a joint venture company on the development of fuel cell drives for heavy trucks. The company, which was announced last year and will be called Cellcentric in future, was founded on Monday, as Daimler Truck and the Volvo Group announced. To this end, Volvo has bought 50 per cent of the shares in the company Daimler Truck Fuel Cell, in which the Stuttgart-headquartered truck manufacturer had previously merged all its fuel cell activities, for around 600 million euros.

Together, Daimler and Volvo want to develop fuel cell systems to go into series production in the second half of the decade. In all other areas, the companies would remain competitors, it was said. They had presented the plans for their joint project in April 2020, and a binding agreement had been signed in November.

Swiss central bank makes a profit in the billions

The Swiss National Bank (SNB) closed last year with a profit of CHF 20.9 billion. This was mainly due to valuation gains on foreign exchange and gold holdings, as the SNB announced on Monday with reference to final figures. The profit on foreign currency positions amounted to 13.3 billion francs. Gold holdings were worth 6.6 billion more, and fees charged to banks for sight deposits at the SNB brought in 1.3 billion. The SNB plans to pay out six billion francs to the federal government and the cantons. Shareholders will receive a dividend of CHF 15 per share certificate.

Based on preliminary figures, the central bank had already forecast an annual profit of around 21 billion francs (about 19 billion euros) in January. In 2019, the SNB had reported a profit of 48.9 billion francs.

The SNB’s result depends on fluctuations in its hundreds of billions of francs in foreign exchange reserves. They are also partly invested in shares and bonds from abroad. The central bank buys foreign currencies to prevent an economically damaging appreciation of the franc, which is often in demand as a “safe haven” in times of crisis. Despite the US accusation of currency manipulation, the Swiss monetary guardians want to stick to this policy.

Goldman Sachs has relaunched its cryptocurrency trading division, according to an insider. Starting next week, it will trade Bitcoin futures and derivatives for clients, a person familiar with the matter told Reuters. The US bank is also looking at the potential for an exchange-traded Bitcoin fund and is exploring custody of digital assets.

Goldman had first set up a trading division for cryptocurrencies in 2018. But the crash in the price of the cryptocurrency at the time put a damper on investor interest in digital assets. In the meantime, following the price explosion of many cryptocurrencies, established financial institutions such as the US derivatives exchange CME, the parent company of the New York Stock Exchange, Intercontinental Exchange and the asset manager Fidelity also offer products and services related to Bitcoin and other cryptocurrencies.