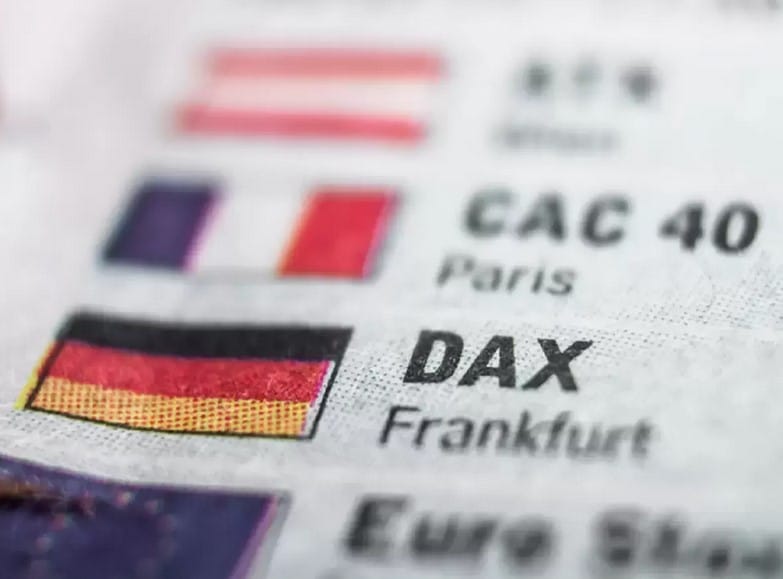 After the US close of trading, Deutsche Börse today announced the new composition of the DAX, which will be increased from 30 to 40 stocks. In return, the MDAX will only have 50 stocks instead of 60. On September 20th, the adjustments will take effect.

In concrete terms, under the leadership of the German-French aircraft manufacturer Airbus, nine more companies will be promoted to the DAX and thus to the top stock market league. In addition, the chemicals trader Brenntag, the cooking box supplier Hellofresh, the holding company Porsche, the sporting goods manufacturer Puma, the biotechnology and diagnostics company Qiagen, the pharmaceuticals and laboratory supplier Sartorius, the medical technology group Siemens Healthineers, the flavours and fragrances manufacturer Symrise, and the online fashion retailer Zalando will move up to the DAX.

Five companies from the small-cap index SDAX will move up to the MDAX. These include the Vodafone transmission mast subsidiary Vantage Towers, the recycling specialist Befesa, the financial services provider Hypoport, the forklift manufacturer Jungheinrich and the online retailer for pet supplies, Zooplus. Hochtief is a construction company, while Morphosys is an antibody company, the wind turbine manufacturer Nordex, the wind and solar park operator Encavis and Shop Apotheke have to vacate their places. These shares will be included in the SDAX in future.

As many as eleven new companies will be represented in the small-cap index. In addition to the five MDAX relegated companies, there are three newcomers to the stock exchange. Suse, a software firm, Synlab, a laboratory specialist, and About You, an online fashion shop, are among them. Another three companies that will shortly be joining the SDAX are the IT group Secunet, which was already briefly represented there last year. At the same time, Vossloh, Borussia Dortmund, Medios, Suess Microtec, ElringKlinger and HHLA have to leave the SDAX. Index changes are particularly important for funds that exactly track indices (ETF). There, rebalancing must then be carried out accordingly, which can have an influence on share prices.

Delivery Hero, an internet delivery service, has funded over one billion euros in fresh money for further growth by issuing convertible bonds. The first tranche of more than 750 million euros will carry an interest rate of 1.0 per cent, the coupon of a second tranche of more than 500 million euros will be 2.125 per cent, the DAX-listed group announced late on Thursday evening. The company had already announced the plan shortly after the stock exchange closed. The interest rate is thus at the upper end of the Delivery Hero management’s idea.

The management intends to use the fresh money from the bond sale “for general corporate purposes” and invest in growth – if appropriate opportunities arise. Analyst Giles Thorne of investment firm Jefferies commented in a first reaction that there are many uses for the new money given Delivery Hero’s broad industry and scale of operations.

The DAX-listed company is currently working on completing the takeover of the South Korean delivery service Woowa and integrating the acquired company. This is where decisive progress has been made recently. The Dax group found a buyer for its own South Korean subsidiary Yogi. The Korean authorities had made the separation from the division a prerequisite for the takeover of Woowa.

The issuing of convertible bonds, which can lead to a higher number of shares in the medium term, put pressure on the share price. The shares fell by 1.93 per cent to 129.25 euros in XETRA trading at the close of trading, putting them at the bottom of the DAX. However, the share price had risen by almost ten per cent in one week. On Thursday, the shares had climbed to nearly 135 euros in XETRA trading, their highest level since the end of April.

Halloren Schokoladenfabrik AG, headquartered in Halle, Germany, says it has been debt-free since last month. The company announced on Friday that an outstanding loan had been repaid ahead of schedule. At the annual general meeting on 18 August, CEO Darren Ehlert said: “The high liquidity makes us independent, and the excellent credit rating forms the basis for further organic growth.

Halloren balls saw record sales in 2020, the statement added. Across all varieties, 16.5 million boxes were sold last year after 14.5 million boxes in 2019, it said. “This sales surge is expected to continue this year, despite the Corona crisis,” the company added. A Halloren Trabi Roadshow will contribute to this, it said. The product range includes more than 180 chocolate products, from confectionery articles to the “Original Halloren Kugeln”.

In its 2020 annual report, the traditional company reported an annual turnover of 23.8 million euros. The year before, it was 27.3 million euros. The decline was due to the pandemic. Due to border closures and lockdowns in the target markets, exports in the last quarter of the 2020 business year fell by 1.1 million euros and thus by 52 per cent compared to the prior year’s comparable quarter. Due to the closures of the company’s own retail shops and a strong damper on business customers, turnover had fallen by a further 1.2 million euros.