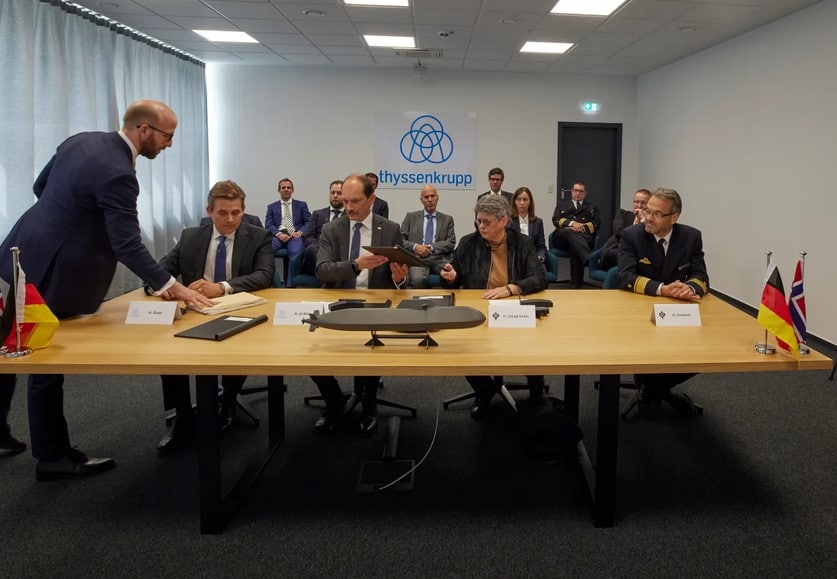 ThyssenKrupp Marine Systems has finally received a long-prepared order to construct six identical Type 212 CD submarines. The procurement organisations of Norway and Germany have signed the corresponding contracts for this purpose, as the subsidiary of ThyssenKrupp AG announced. The order volume amounts to around 5.5 billion euros.

The Norwegian and German navies are to receive the most modern submarines in the world. The order includes the delivery of two submarines to the German Navy and four to the Norwegian Navy.

ThyssenKrupp Marine Systems and its Norwegian industrial partner Kongsberg concluded a cooperation agreement to continue realising many projects together in the future. Construction of the first submarine is scheduled to start in 2023. Delivery of the first vessel for the Norwegian Navy is expected in 2029, while the two boats for the German Navy is scheduled for 2032 and 2034. In preparation, ThyssenKrupp has already initiated investments of around 250 million euros in 2019. The goal is to further develop ThyssenKrupp Marine Systems at the Kiel site into an international competence centre for conventional submarine construction.

The ThyssenKrupp share nevertheless loses 1.73 per cent to 8.53 euros in weak XETRA trading.

The slide in the share prices of Chinese companies listed in the USA did not end on Thursday. After China’s government had announced much stricter controls for them the day before, the shares of DiDi, a ride service provider that had only recently been listed in New York, sank by 6 per cent to just under 11 US dollars on Thursday. They thus moved further away from the issue price, which had been 14 dollars at the end of June.

DiDi shares have been in free fall for days; on the first day of trading just over a week ago, they had risen to a peak of around 18 dollars. But then came Tuesday, when it was announced that the Beijing Cyberspace Supervisory Authority was investigating the company for “serious violations” in the collection and use of personal data. It ordered the deletion of the DiDi app from Chinese app stores. There had already been speculation that the US IPOs were a thorn in the Chinese side.

New regulations announced the day before are now likely to make it much more difficult for emerging Chinese companies to raise capital on foreign stock markets such as New York or Hong Kong. The new rules specifically target “data security, cross-border data flow and the management of confidential information”, according to a document issued by the State Council in Beijing on Wednesday. Future IPOs will also have to be specifically approved.

The regulatory fears also extended to many other shares of Chinese companies listed in the USA in recent days. The shares of the search engine operator Baidu and the internet giant Alibaba, for example, have each slid by almost 4 per cent. Baidu reached a low since mid-December, Alibaba fell just below 200 dollars to its lowest level since the end of May 2020.

The complete takeover of Media-Saturn-Holding by the electronics retailer Ceconomy is delayed. In a statement on Thursday evening, the group referred to a preliminary legal opinion of the Higher Regional Court of Düsseldorf in the approval procedure regarding a planned capital increase. Against which some investors are suing, this capital measure was intended to finance the purchase of the 21.62 per cent held by the Kellerhals family through their family holding company Convergenta. In return, Convergenta is to be given a stake of up to 29.99 per cent in the electronics retailer.

The background is a long-simmering conflict that both sides had settled at the end of 2020. According to the announcement on Thursday, Ceconomy is sticking to the plans but now no longer sees enough certainty that the transaction can be completed in the current 2020/21 financial year (until the end of September).

a16z doubles down on crypto

After the high profits Andreessen Horowitz made on the Coinbase IPO, the American venture capital firm is now planning to inject billions more into the market with the new Crypto Fund III.

In April 2021, Andreessen Horowitz earned well from Coinbase’s IPO. Even before the IPO, investor Marc Andreessen owned private shares in Coinbase. Andreessen Horowitz itself also held 24.6 per cent of the Class A shares and 14.2 per cent of the Class B shares right from the beginning. This made them the largest institutional investor in the cryptocurrency exchange. The venture capitalist entered with 25 million US dollars at a company valuation of 140 million US dollars. At the IPO, the stake was worth around 11.2 billion dollars on a first-price basis.

Now a16z wants to invest further in crypto assets. The third Crypto Fund, which the company is launching, has a total volume of 2.2 billion US dollars. According to the news outlet “Trending Topics”, this makes it the largest crypto fund ever launched. By comparison, Andreessen Horowitz’s Crypto Fund I was worth 300 million US dollars, and Crypto Fund II was worth 515 million US dollars. According to the company, it has also hired high-calibre staff from a wide range of fields to help venture capitalists meet the challenges in the crypto space. Last year, for example, it hired Anthony Albanese, who had previously worked at the New York Stock Exchange, to lead its investments. The company’s website goes on to say that Andreessen Horowitz is more excited than ever about how and where the crypto industry is headed: “We’ve never been more excited about where crypto is headed, and we’re betting it all on the talented, visionary founders who are determined to be part of crypto’s next chapter. If you are one of them, we would love to hear from you.”

Judging by this, Andreessen Horowitz is likely to make more crypto investments in the future. The venture capitalist firm is optimistic about the potential of cryptocurrencies. According to its statements on the company website, the plan is to continue investing in crypto networks and the founders and teams working in this area.