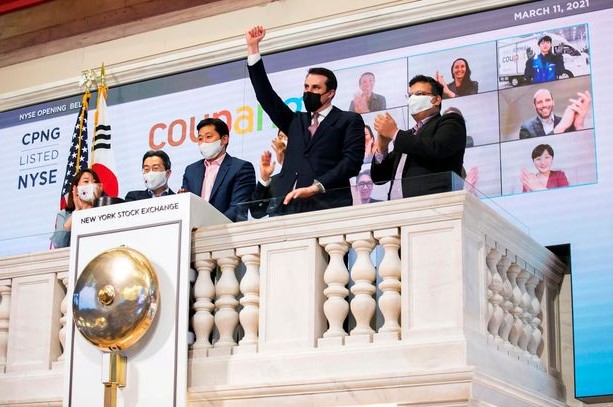 Coupang starts with a bang!

The South Korean online mail-order company went public on the New York Stock Exchange on Thursday, eclipsing even the initial public offering of the dating app Bumble a few weeks ago.

In the run-up, the price range had been increased several times: After 27 to 30 US dollars per share certificate were initially discussed, the range was increased to 32 to 34 US dollars, and ultimately the demand resulted in 35 US dollars. This alone brought 4.6 billion US dollars into Coupang and existing shareholders’ coffers – the largest foreign-origin IPO in New York of all time after Alibaba.

Coupang, based in Seoul, is one of the largest e-commerce companies in the country. With 12 billion US dollars, the group almost doubled its turnover last year. Despite the better business, however, Coupang is still in the red. In 2020, the bottom line was a loss of almost 475 million dollars. The year before, the loss was about a third higher. The Japanese Softbank Group holds a good one-third stake in the promising start-up.

The strong cloud business with IT applications and storage space on the internet gave SAP rival Oracle a further boost in the latest quarter.

At the bottom line, the group earned 5 billion dollars in the three months to the end of February, almost twice as much as a year ago. Oracle also announced a three per cent rise in revenue to 10.1 billion dollars on Wednesday after the US stock market closed. The board of directors also increased the framework for share buybacks by 20 billion dollars. Although the results were in line with market expectations, the share price initially reacted with losses of almost three per cent after the close of trading.

However, the share price had risen by more than 20 per cent in the past three months and recently reached a record high, so that the opportunity for profit-taking is favourable. Consequently, Oracle shares lost 6.49 per cent to 67.44 US dollars in NYSE trading today.

Burdened by the pandemic’s effects, BMW earned significantly less last year due to declining car sales. Profits slumped by almost a quarter, as the DAX-listed group announced. Accordingly, the dividend is to fall to 1.90 from 2.50 euros per ordinary share in the previous year. The Munich-based manufacturer was cautiously optimistic for the current year.

According to further information, sales fell by 5 per cent to 98.99 billion euros in 2020. In the core business with premium cars, revenues slumped by almost 12 per cent. Group EBIT declined disproportionately to revenues by a good third to 4.83 billion euros. Before taxes, BMW earned 5.22 billion euros, 26.6 per cent less, and after taxes, 3.857 billion euros, a good 23 per cent less than in the previous year. Earnings per ordinary share were 5.73 euros (previous year: 7.47).

“We have improved our cost situation and reduced our fixed costs as well as our investments,” Chief Financial Officer Nicolas Peter said, according to the statement. “We have thus created a favourable jumping-off point for a profitable 2021.”

In the past year, the Italian insurer Generali earned more than ever before in its day-to-day business. Double-digit percentage growth rates in property and casualty insurance and buoyant asset management led to an operating profit of 5.2 billion euros, slightly above the previous year’s record figure. The corona pandemic’s consequences only burdened the operating result with 123 million euros, Generali announced in Trieste on Thursday.

However, overall, Generali suffered significant losses as the financial market turmoil caused by the corona pandemic and the expensive settlement of a dispute over the Swiss bank BSI sale had cost it dearly over the year. Profits slumped by more than a third to around 1.74 billion euros.

Generali boss Philippe Donnet nevertheless spoke of “excellent results” for the company in an unprecedented environment caused by the Corona crisis. The insurer had proved more robust than competitors and was well-positioned to achieve its 2021 targets. Accordingly, management is sticking to its targets of 6 to 8 per cent annual growth in earnings per share for 2018 to 2021.

Shareholders are to benefit from the good operative development with an increased dividend of 1.01 euros. Also, the group intends to pay the portion of the dividend for 2019 that was withheld last year. In total, shareholders will receive 1.47 euros for each Generali share held this year.

The Generali share temporarily gained 1.02 per cent to 16.79 euros.

The Canadian fuel cell manufacturer Ballard Power has presented its figures for the fourth business quarter. In the past quarter of the year, the company from Burnaby, Canada, generated revenues of CAD 28.6 million. In the same period of the year before, Ballard Power had still earned 56.2 million CAD; analysts had previously forecast sales of 38.5 million CAD. Ballard Power thus disappointed expectations.

For the full financial year, revenues slumped from CAD 142.4 million to CAD 103.9 million; analysts had previously expected CAD 135.4 million. The loss per share for the full fiscal year was CAD 0.20, compared to CAD -0.228 in the previous year and analysts’ estimates of CAD -0.239.