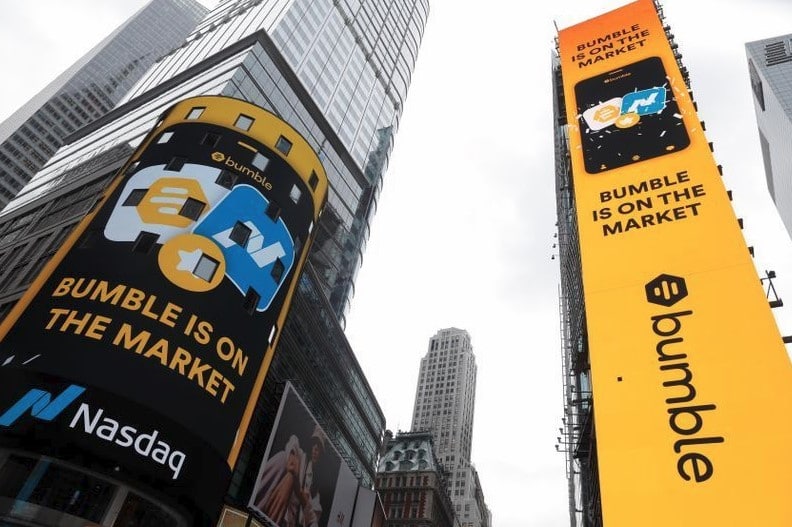 Shares in Tinder rival Bumble got off to a flying start on the US technology exchange Nasdaq on Thursday. Listed under the ticker symbol BMBL, the shares of the operator of the online dating platforms Bumble and Badoo met with strong investor interest at the start of trading – the initial price of 76 US dollars was almost 77 per cent above the issue price. The shares exited trading significantly lower at 70.31 dollars. In total, the company was valued at around 8.2 billion dollars at the IPO.

The Bumble app was launched in 2014 by the 31-year-old Whitney Wolfe Herd, who was already one of the major competitor Tinder co-founders and is now the youngest CEO to lead a major US company to the stock exchange. The special feature of Bumble is that women make the first step in dating there. In the nine months to the end of September 2020, the company made a $28 million net loss.

Despite the red figures, demand for the shares before the IPO was so high that Bumble ultimately offered 50 million papers instead of the initially planned issue of 35 million shares. Also, the issue price was raised from 30 to 43 dollars per share. Bumble wanted to raise around two billion dollars with the IPO to grow further and take market share from its competitor, Tinder.

The cannabis company Aurora Cannabis has performed mixed in its second fiscal quarter. The bottom line was a loss of 292,788 CAD, after a loss of 1,302,175 CAD in the same period last year. Experts had expected a higher loss.

At the same time, Aurora Cannabis turned over CAD 67.67 million in the past reporting quarter. A year ago, the group had still recorded sales of 56 million CAD. The company thus beat analysts’ estimates – experts had forecast average sales of 68.9 million CAD.

Aurora Cannabis shares, which are listed on the NYSE, are currently losing 5.98 per cent to 13.61 US dollars.

The US online gambling provider DraftKings offers its users numerous opportunities to bet on fantasy sports events every day. Thus, the group strikes a chord with the times and benefits from increasing legalisation in many states.

DraftKings, which is based in Boston in the US state of Massachusetts, offers online gamblers, fans of sports betting and gamblers an extraordinary kind of betting experience. At DraftKings, users can no longer just bet on a final result or the winner of the competition but can build their own fantasy team, which competes against other teams in a fantasy league.

With the help of a very aggressive marketing strategy, the betting provider DraftKings, which was only founded in 2012, has already been able to attract numerous customers, partners and investors. With the NFL, MLB and NHL and the US television station ESPN, which Disney owns, the dynamic company could find well-known cooperation partners within a very short time.

Besides, the two NFL team owners Jerry Jones, owner of the Dallas Cowboys, and Robert Kraft, the New England Patriots owner, are among the betting provider’s most prominent investors. Furthermore, the group also works together with basketball legend Michael Jordan.

DraftKings made the leap to the New York Stock Exchange NASDAQ in 2019 with the help of a SPAC (Special Purpose Acquisition Companies) IPO, which Diamond Eagle Acquisition Corporation carried out.

The original blank cheque company’s shares were issued at a price of 10 US dollars per share. When the so-called special purpose vehicle, Diamond Eagle, then publicly announced in December 2019 that it would merge with DraftKings, the share price climbed to as much as 18.69 US dollars within a short time.

With a current price of 59.19 US dollars, the online betting operator’s shares have now gained almost 500 per cent since the blank cheque IPO. Accordingly, the group currently has a market capitalisation of 49.21 billion US dollars.

High provisions for impaired loans have caused a sharp drop in profits for the major Dutch bank ING in the Corona year 2020. Because costs were also incurred for job cuts, net profit plummeted by almost half to just under 2.5 billion euros, as the bank announced in Amsterdam on Friday. In the fourth quarter, however, the burdens were less, so that the bank earned more than analysts had expected on average.

The news was well-received on the stock exchange. Industry experts from JPMorgan, Goldman Sachs and the analyst firm Jefferies were pleased with the latest business figures.

At the end of the session, the ING share was up 6.71 per cent at 8.349 euros on the EURONEXT in Amsterdam and was by far the strongest stock in the Dutch leading index AEX. However, its price is still almost a quarter lower than a year ago, when the corona crisis had not yet hit the economy and the financial markets.