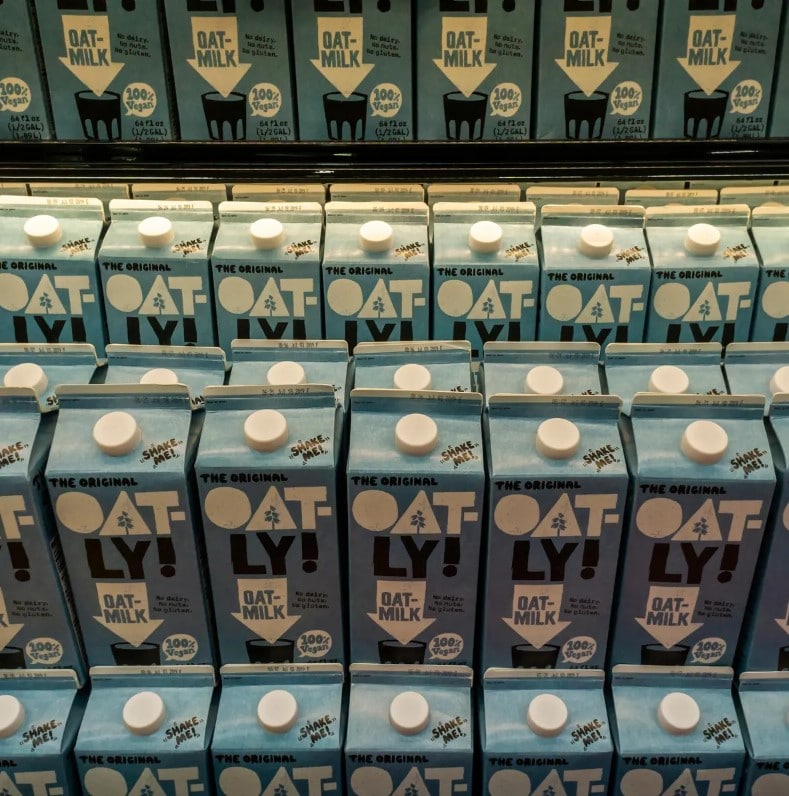 Thus, the company of the two brothers Rickard and Björn Öste from Malmö reached a valuation of about 13 billion US dollars right off the bat; about a year ago, the group was valued at about two billion US dollars.

In total, Oatly raised almost 2.12 billion US dollars in the IPO. Thirty-two million US depositary receipts (ADS) were brought to the stock exchange by investors such as the US presenter Oprah Winfrey, the rapper Jay-Z and the former Starbucks boss Howard Schultz, in addition to 64 million papers from Oatly itself, which came from a capital increase. The issue price of 17 US dollars was at the upper end of the price range of 15 to 17 US dollars.

After the IPO, the majority shareholder remains Verlinvest, the investment company of the family that owns brewing giant Anheuser-Busch InBev, which joined Oatly in 2016 through a joint venture with China Resources.

The company intends to invest the billions raised in the IPO primarily in its own expansion and further growth. In this context, the company recently announced an extensive deal with the US coffee house chain Starbucks. In future, drinks and snacks based on Oatly oat milk will be offered in the company’s branches.

Last year, Oatly had still made 400 million US dollars in sales; through the cooperation with Starbucks and further expansion – especially in China, where the investor China Resources could open doors – Oatly is aiming for a doubling of sales for the current year.

The Oatly share closed its first day of trading on the NASDAQ 18.80 per cent above the issue price at 20.20 US dollars.

Deutsche Telekom wants to increase growth in the coming years and continue to give shareholders a share in the development.

Average annual growth in adjusted operating profit excluding leasing expenses (EBITDA AL) is expected to be 3 to 5 per cent by 2024, the DAX-listed group announced at the Capital Markets Day. Turnover is expected to grow by 1 to 2 per cent on average. Free cash flow AL is expected to reach more than 18 billion euros in 2024 after 6.3 billion in the past year.

“We want to exceed the strong development of the past years and lead the Group into the future with sustainable growth,” said Telekom CEO Tim Höttges, according to the statement.

Deutsche Telekom is aiming for a majority stake in the lucrative US business. “We will secure a majority in the US,” CEO Tim Höttges said during the Capital Markets Day press conference. When and under what conditions the majority will be acquired has not yet been decided, he said. For years, Telekom has profited from strong business in the USA, where T-Mobile has been steadily gaining market share with an aggressive pricing policy.

The Bonn-based group had concluded a call option for 101 million T-Mobile shares with the Japanese T-Mobile US shareholder Softbank. The option runs until mid-2024, and Telekom can acquire the shares at a lower price than the current share price. Currently, Telekom holds about 43 per cent of T-Mobile US.

At the beginning of this week, the Handelsblatt, citing company circles, had reported that Deutsche Telekom wanted to establish itself permanently in the US mobile market and increase its stake in T-Mobile US to a majority.

Deutsche Telekom shares reacted with gains to the Bonn-based company’s new medium-term business targets in XETRA trading on Thursday. They closed 2.51 per cent firmer at 17.01 euros. This set them on recovery after Wednesday’s 2.8 per cent drop in the share price.

The heirs of Munich billionaire Heinz Hermann Thiele, who died in February, are parting with more than half of their Lufthansa share package. The family company KB Holding threw 33 million Lufthansa shares on the market on Thursday evening, two people familiar with the placement told Reuters. Bloomberg had reported on this earlier.

At the Xetra closing price of 10.87 euros, the shares up for sale are worth just under 360 million euros. However, securities are usually placed with investors at a discount in such placements. Lufthansa shares fell by 3.4 per cent to 10.44 euros in late trading.

Thiele had reduced his stake in Lufthansa to 10.04 per cent from 12.4 per cent shortly before his death and most recently still held 60 million Lufthansa shares. He had only joined the airline during the corona crisis and, as an activist investor, had critically accompanied the rescue entry of the state. He was Lufthansa’s second-largest shareholder after the German government.

Internet giant Google is entering the traditional retail business by opening a shop. The first so-called Google Store is to open this summer in New York’s Chelsea district, where the company already has its US East Coast headquarters.

According to an entry in the company blog on Thursday, Google wants to offer its Pixel mobile phones and notebooks as well as Fitbit fitness trackers and Nest brand smart home equipment there, among other things. The subsidiary of the Alphabet group is thus relying on the recipe for success of the iPhone giant Apple, which operates hundreds of such shops and has been increasing its sales with them for years.

Networking specialist Cisco is paying for its expected revenue growth with higher costs to investors’ displeasure. Companies are apparently investing more in their networks again, so the company expects a revenue increase of 6 to 8 per cent in the fourth fiscal quarter compared to the same period last year. This would correspond to 12.9 to 13.1 billion US dollars. Analysts had previously only expected 12.8 billion dollars.

However, to meet this rising demand, Cisco will have to spend more money on components. Adjusted earnings per share are expected to be between 81 and 83 US cents; the company announced on Wednesday after the US stock exchange closed in San Jose. Experts had previously expected 85 cents. Supply chains for semiconductors, in particular, are under pressure, which can lead to price increases. Other sectors such as carmakers are also suffering.