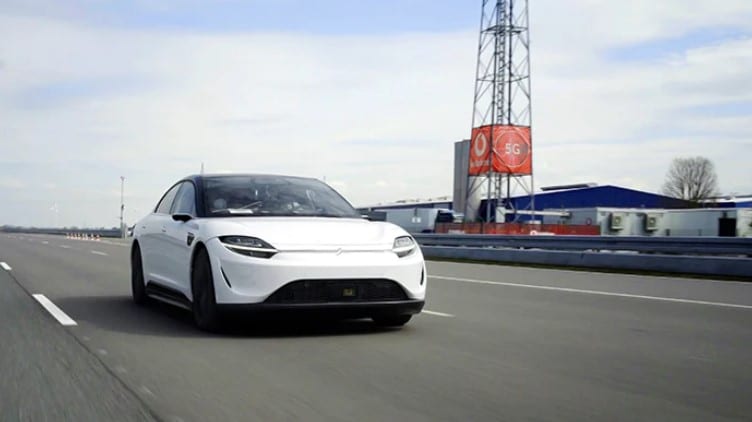 Sony is said to further developing its electric car prototype with connectivity to the superfast 5G data network. The car is supposed to be able to load software updates and also synchronise control signals via radio. With the mobile phone provider Vodafone, Sony is working on a test track in Aldenhoven near Aachen, both companies announced on Wednesday. Among other things, the aim is to maintain a stable connection to the mobile phone network even at high speeds.

Sony presented the prototype with the name “Vision-S” at the beginning of 2020 at the CES technology trade fair in Las Vegas. At the time, the Japanese electronics company explicitly left open whether the vehicle would be produced in series. However, the ongoing work on the car is an indication that this could happen.

While Sony was the first electronics company to present a car project publicly, there has been speculation for years about Apple’s plans to launch its own electric car. The only factual information so far is that the iPhone company is testing technology for autonomous driving.

Despite the record chase on the global stock markets, Deutsche Börse earned less in the first quarter than a year ago. The bottom line was a 14 per cent lower profit of 317 million euros, as the Frankfurt stock exchange operator announced after the close of trading. However, the development was expected, as the starting quarter, last year was particularly strong, with massive price swings due to uncertainties caused by the corona crisis.

CEO Theodor Weimer had already dampened the outlook for the first quarter of 2021. Net revenues now fell by seven per cent to 855 million euros. The operating result fell by 12 per cent to 521 million euros. However, CFO Gregor Pottmeyer was confident in the outlook: “Since we anticipated this development in our forecast for the current financial year, we are also confident that we will achieve our growth targets in 2021. US bank JPMorgan left Deutsche Börse at “Overweight” with a price target of €170 after the figures for the first quarter.

In Xetra trading, the shares of the DAX member company were 0.9 per cent lower at 146.00 euros.

Booming stock markets gave the Norwegian sovereign wealth fund a vast profit in the first quarter. It added up to 46 billion dollars between January and March, mainly due to the good stock performance in the financial and energy sectors, as the world’s largest sovereign wealth fund, worth 1.3 trillion dollars, announced in Oslo on Wednesday. This corresponds to a return on capital of four per cent.

The fund invests the Norwegian state’s income from oil and gas production in 9,100 companies worldwide and owns 1.4 per cent of all listed shares. But it also puts a lot of money into bonds, real estate and, as of this month, green infrastructure. While equities brought the fund a return of 6.6 per cent, the fixed-income portfolio posted a rare loss of 3.2 per cent. The reason for this is interest rates, which have risen significantly after a prolonged slide.

Concerns about the consequences of the ongoing corona crisis are diminishing among the Norwegians. “I would still rank it as one of the top three risks,” its chief executive Trond Grande told Reuters news agency. “But we see a slightly more balanced risk picture because there is now more optimism for growth and inflation.”

Plug Power shocked investors a few weeks ago with the bad news that errors had been found in its balance sheet. Due to the resulting slump in the share price, the hydrogen pioneer is now facing investor lawsuits.

Despite the company’s attempts at appeasement, investors reacted very angrily and sent the share price plummeting. This has prompted several law firms, which now say they have filed lawsuits against Plug Power and some of the company’s officers over the incidents.

These lawsuits accuse Plug Power of violations of the Companies Act. For example, the company failed to provide timely information about the problems. Therefore, its positive statements about its business operations and prospects were misleading.

Investors who bought the shares from 9 November 2020 to 1 March 2021 and suffered price losses are called upon to contact the law firms to discuss their rights and options. They may be entitled to compensation, according to the law firms.