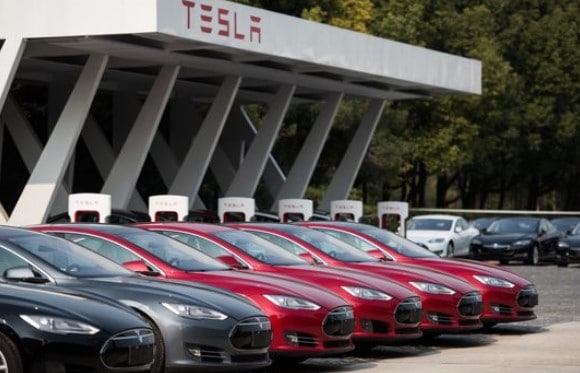 Tesla impresses again with a strong jump in sales and profits

The electric car manufacturer Tesla opened its books after the close of trading on Monday and reported on its business performance in the second quarter.

Tesla also achieved record figures for the delivery and production of its e-cars in the past quarter. The company delivered 201,304 vehicles to customers and produced 206,421 units – more than ever before in a single quarter since the company was founded in 2003.

Tesla further emphasized that it is on schedule with constructing the first plant in Europe in Grünheide near Berlin. The first electric cars are anticipated to roll off the production line there this year. Given various hurdles and discrepancies at the bureaucratic level, uncertainty about the timetable had increased in recent months. Meanwhile, there was a setback with Tesla’s semi-truck – Tesla postponed the first deliveries of the semi-truck to 2022.

The quarterly figures clearly exceeded analysts’ forecasts. Nevertheless, the share reacted relatively cautiously in the after-hours trading, even though there were significant price gains of up to around 3 per cent at times. Tesla also achieved record delivery and production figures in the most recent quarter. The company delivered 201 304 e-cars to customers and produced 206 421 units – more than ever before in a single quarter since the company was founded in 2003.

Tesla largely defied the computer chip and raw material shortages that have recently plagued the auto industry. Even though the company warned that the supply of chips and components could remain difficult and slow growth in the second half of the year, it did not compromise on its targets – on the contrary. Tesla had previously aimed to increase its deliveries by 50 per cent in 2021 after more than half a million cars in the previous year. Now the company has announced that it expects even stronger growth.

Tesla shares gained 1.02 per cent higher at 664.30 US dollars in after-hours NASDAQ trading.

Ryanair is still deep in the red

The sluggish recovery of the travel business in the Corona crisis kept the low-cost airline Ryanair in the red in the past quarter. In the first fiscal quarter to the end of June, the bottom line was a loss of 273 million euros, almost one and a half times as much as a year earlier. However, Ryanair CEO Michael O’Leary expects passenger numbers to rise significantly in the summer, provided rising infection figures do not lead to further setbacks in the airline business.

Lucid Group is traded on the US technology exchange NASDAQ under the symbol “LCID” as of today. The IPO took place via a SPAC, a Special Purpose Acquisition Company. On Friday, the merger of Lucid with the corporate shell “Churchill Capital Corp. IV” was approved in the second attempt. According to the company, 99 per cent of all shareholders voted in favour of the merger.

On Friday, the then Churchill Capital Corp. IV shares closed NASDAQ trading at US$24.25. The new Lucid Group share then started Monday’s trading 4.08 per cent higher at 25.24 US dollars. By the end of trading, the stock had gained 10.64 per cent to 26.83 US dollars.

LVMH earned strongly more in the first half of the year, both operationally and on the bottom line, and significantly increased sales. The core segment “Soft Luxury” in particular drove up results.

Operating profit rose to €7.63 billion for the French luxury goods group in the first half of the year. This was almost five times as much as in the same period last year and exceeded the first half of the pre-crisis year 2019 by 44 per cent. Revenue rose to 28.67 billion euros from 18.39 billion previously, according to LVMH Moet Hennessy Louis Vuitton SE.

The figures exceeded expectations. Analysts had expected an operating profit of 6.83 billion euros on sales of 28.36 billion.

Net profit was 5.29 billion euros, more than ten times the first half of 2020. Sales in the core fashion and leather goods division, which includes the Dior and Louis Vuitton brands, rose the most, by 74 per cent year-on-year to 13.86 billion euros. All other divisions also recorded high year-on-year growth, although the perfume and cosmetics and selective retail segments remained below pre-pandemic levels in terms of sales.