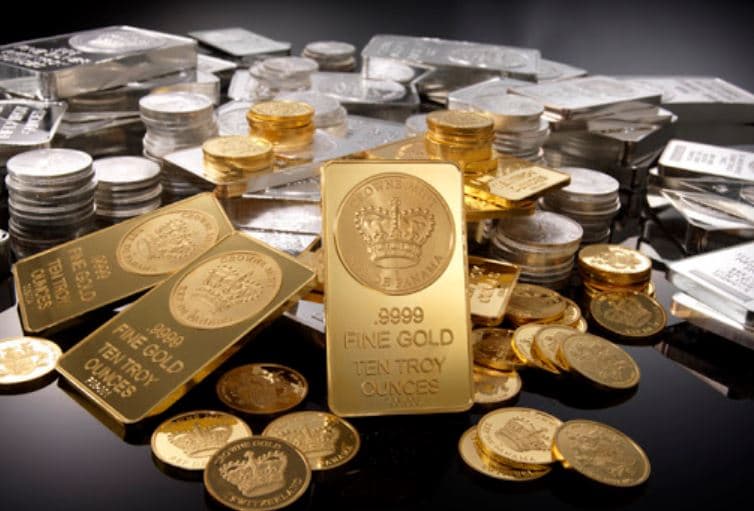 Many investors want to profit not only from rising share prices but also from upward trends in commodity markets. Furthermore, precious metals have always been considered a hedge against inflation and especially the precious yellow metal gold is THE global safe haven. In times of crisis and ultra-low interest rates, metals are getting more and more attention.

Before we turn to 2020, however, it is worth taking a look at the past year 2019. Last year’s big winner was palladium, which gained around 52% in value. The price of oil (the variety WTI) also recorded modest gains and climbed by almost +36%, closely followed by nickel with an increase of 34%. Platinum was able to gain 23%, while gold was up by 19%. Overall, it was a good year for most commodity investors.

Worldwide, commodities are traded in US dollars (USD) at this stage. Due to the weak greenback, commodity prices were sustainably supported last year as well as this year. If the USD weakens, commodities in domestic currencies such as the euro or yen will become cheaper. This further boosts the global demand for commodities.

Which commodities recorded the most significant gains in 2019?

Gold has secured the fifth place among the best commodities in 2019. The popular precious metal was able to post a large part of its gains in the second half of the year after it had broken out of a long-standing sideways consolidation on the charts. Concerns about the situation in Iran and the trade war between the USA and China boosted the precious yellow metal.

Around 2,500 tonnes of the precious metal is mined worldwide each year, but only approximately 10% is needed for the production of electronics and technical equipment. Industrial demand is therefore relatively low, with around 90% of the precious metal being used as an investment or in jewellery processing.

Place number 4 goes to platinum. In 2019, the chart picture for platinum brightened somewhat, after the precious metal had previously been in a downward spiral for years. In the second half of 2019, a strong price rally set in. For the first time since the beginning of 2018, the price of platinum passed the $1,000 mark. The primary demand for the metal platinum comes from the automotive industry, where the metal is used in catalytic converters. Here platinum competes with palladium and has recently been at a disadvantage. As platinum is mainly used in the ever less demanded diesel engines, demand has fallen considerably in recent years before at least an interim recovery set in in the second half of 2019.

The metal nickel secured third place. Nickel is mainly used as an alloying metal for steel refinement, as it makes the steel resistant to corrosion and increases its hardness. But nickel is also used in the e-mobility segment. If the step towards electrification is unstoppable, the required raw materials will remain in the spotlight. As more and more cathodes with a higher nickel content are used, the demand for nickel is snowballing.

Crude oil has secured second place, with US WTI growing by 36%, a much more substantial increase than that of North Sea Brent (+24%). After the US-China customs dispute temporarily depressed the oil price, the escalating Iran conflict led to a significant recovery of the “black gold”. Following acts of sabotage, the shooting down of a US drone and attacks on oil tankers in the Strait of Hormuz, the USA strengthened its troop presence in the Middle East region. About a fifth of the world’s crude oil is shipped through the Strait. The oil price had collapsed considerably at the end of 2018, so the starting level was correspondingly low. Second place is, therefore, a little “undeserved” and this year’s performance is an entirely different ball game. Here, we saw a historic novelty with oil prices even plummeting below $0 when the corona crisis and additional conflicts between the OPEC put heavy pressure on oil prices.

The biggest winner in 2019 is palladium. The precious metal completed another impressive rally last year, which accelerated further in the year. Compared to other precious metals such as gold, silver and platinum, palladium now enjoys the highest industrial demand. The metal has numerous potential applications, for example as a catalyst in the automotive industry, in nanotechnology or coatings. The reactivity of palladium with hydrogen compounds and the associated possibilities in the field of hydrogen drives is undoubtedly also interesting.

Which raw materials have the highest potential in the rest of 2020?

After looking back at the past year, we now want to turn our attention to 2020. For precious metal investors, the year has been brilliant so far, as investors sought protection in the precious metals gold and silver in the wake of the corona crisis. The price of crude oil, however, experienced a historic crash and even traded in negative territory on the futures market for a short time. Base metals were also affected, but are now, in mid-2020, recovering.

The prospects for a continued rise in gold prices in 2020 are excellent. From a fundamental perspective, the framework conditions for the asset class gold had already brightened significantly in 2019: In addition to the resurgent central bank purchases, the coronavirus crisis, in particular, is providing a positive gold price forecast. This is because the Covid-19 pandemic had the effect of a meteorite impact on the global economy. From a chart technical point of view, the traffic lights are green since the $1,375 mark was passed. In the longer term, the price of gold could well target the all-time high of 2008 at around $1,920, especially if the coronavirus crisis has a negative economic impact for longer than expected.

Silver has fallen back from an all-time high of $50 in 2011 and has never been able to recover since. For years it has been moving sideways between $14 and $20. Since 2018, however, the positive signals have been increasing. The previously existing downward trend was overcome and changed into a sideways trend. Now it is necessary to overcome the technical resistance in the range of $19 to $20 to establish a new upward trend. Then prices of $25 and in the long term also $30 could be seen. Since silver is used more heavily than gold in industry, gold is typically used over silver, for example, as a crisis hedge.

After years of downward movement, platinum finally seemed to be forming an upward trend. However, after briefly crossing the $1,000 mark, the price fell to new 15-year lows of $600. Currently, platinum is trading back in the $800 range and thus in the range of important chart technical support from the last ten years. To re-establish a bullish trend, platinum would have to cross and hold above the $1,000 mark. This scenario is not yet foreseeable at present. Still, the World Platinum Investment Council (WPIC) expects the “turning point” for the automotive sector, with a subsequent reversal of the trend towards rising demand again.

Palladium was one of the commodities with the most substantial price rises in the past four years with a price increase of 500% to $2,800 an ounce. But a rally cannot continue forever. When looking at the past eleven years, an unbelievable plus of 1,350% can be seen. Currently, the palladium price is just under $2,000, and it could experience a weaker year with a negative performance in 2020.

Following the price slump, the global oil industry is facing a fundamental reorganization in which only the most reliable companies will survive. Market shares are likely to shift in the direction of “big oil”, i.e. towards the industry giants. The big oil companies have vast cash reserves and can borrow, tap the bond market or issue new shares much more easily. Many oil production projects that might become interesting again can be bought at bargain prices from faltering competitors. Even though some experts believe that oil prices will rebound sharply and also suggest barrel prices above $100 early next year, we highly doubt that this scenario is likely to play out. In our view, the oil price is likely to remain weak in 2020, as global traffic and flight volumes have fallen enormously as a result of the corona crisis. A trading range of between $25 and $45 is conceivable, for example. If there is one thing that the current crisis is teaching us, then it is that many industries have to adapt and change. A move further away from oil could be part of this “reinvention” of sectors.