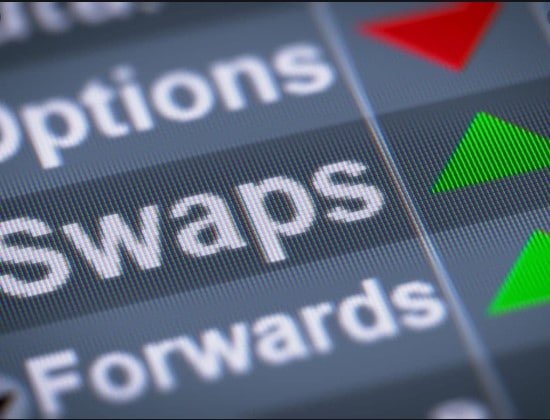 In swap transactions, trading partners exchange debt securities with different interest rates, currencies and maturities. The purpose of swap transactions is to reduce financing costs. Swaps are not traded on exchanges, and retail investors do not generally engage in swap transactions. Instead, swaps are over-the-counter (OTC) contracts primarily between businesses or financial institutions that are customised to the needs of both parties. The financial instruments exchanged in a swap do not have to be interest payments. There are countless varieties of exotic swap agreements. The most common arrangements include credit default swaps, swaptions, vanilla swaps, commodity swaps, currency swaps, debt swaps, and total return swaps.

Let’s go through a few of them.

These type of swaps involve the exchange of a floating commodity price, such as the Brent Crude oil spot price, for example, for a set price over an agreed-upon period. Commodity swaps most commonly involve crude oil.

Both put and call swaptions are over-the-counter (OTC) contracts and are not standardised like equity options or futures contracts. Therefore, the buyer and seller need to agree on the price of the swaption, the time until the expiration of the swaption, the notional amount, and the fixed and floating rates.

A vanilla swap is a standard swap structure in which swaps have general or well-defined features, in particular with regard to coupons, notional amount, swap legs, and so on. For example, a vanilla interest rate swap is an agreement whereby a company undertakes to pay a stream of cash flows of interest at a predefined fixed interest rate on a notional amount for a specified period of time. In return, the company receives a commitment from a counterparty to pay a stream of cash flows calculated as interest at a floating rate with the same nominal amount for the same period. This form of swap is the simplest and does not include any add-ons or additional features. Initially, most vanilla swaps have no economic value, i.e. none of the counterparties would be obliged to pay any amount to the other at this early stage. Vanilla swaps (as opposed to flavoured swaps) are also called basic swaps.

A financial swap contract is a derivative contract where one party exchanges the cash flows or value of one financial asset for another. As an example, a company paying a variable rate of interest may swap its interest payments with another firm that will then pay the first company a fixed rate. Swaps can also be utilised to exchange other kinds of value or risks like the potential for a credit default in a bond.