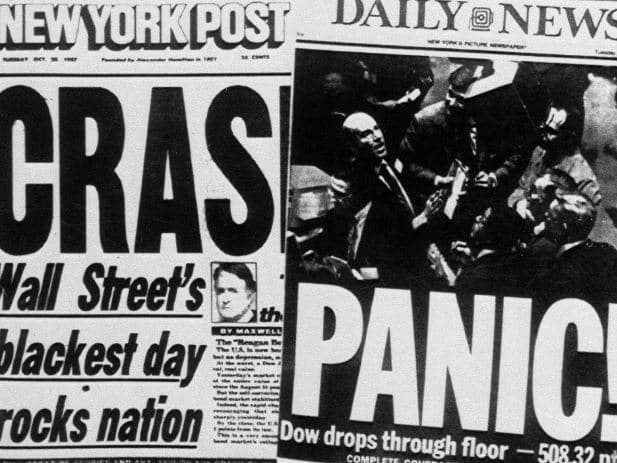 On this memorable day, speculation on higher US interest rates caused prices to plummet worldwide. The Dow Jones index plunges 22.6 per cent. Even after the attacks of 11 September 2001, the slump was not as severe. In Frankfurt, prices measured against the recalculated Dax – the index was not introduced until 1 July 1988 – tumble by an average of 9.4 per cent.

On the German stock market, this date is the blackest day in post-war history: the Dax plunged 12.8 per cent – the most significant one-day loss in its history to date. This was triggered by a fall in prices on Wall Street the previous Friday, which had been triggered by financing problems when the airline UAL was bought.

Four days after the invasion of Iraq into Kuwait, the stock market is gripped by fear of the consequences of the advance of Saddam Hussein’s troops. Concerns about the costs of German reunification put additional pressure on the stock exchange. The Dax falls by 5.4 per cent.

In reaction to the attempted coup against the then Soviet President Mikhail Gorbachev, the Dax lost a good nine per cent. One of the worst days for the Dax in its more than 30-year history.

In the wake of the Asian crisis, the Dax followed Wall Street downwards, collapsing by almost 13 per cent at times.

Concerns about the Russian financial crisis are pushing the Dax down by 5.4 per cent. This is triggered by statements by Russian Prime Minister Sergei Kiriyenko that Russia is only at the beginning of a severe financial crisis.

Fears of a conflagration in the banking sector following the collapse of a hedge fund and an escalation of the crisis in Asia, Latin America and Russia are pushing the Dax down 7.6 per cent.

The attacks of 11 September triggered panic on the financial markets. While Wall Street, which is located near the World Trade Center, remains closed, a wave of selling is sweeping through the European stock exchanges. The Dax falls by 8.5 per cent. In the course of trading, the index even collapses by more than eleven per cent. The stock exchange terminates trading prematurely to enable the banks to settle stock exchange transactions properly.

Fears of possible retaliatory attacks by the USA are again pushing the Dax down by more than six percent three days after the attacks. Added to this is the uncertainty of investors in Europe before the reopening of Wall Street the following Monday, 17 September. After a four-day trading interruption, the Dow Jones finally falls by a good seven per cent.

A few days after the beginning of the war in Iraq, doubts are growing in the financial markets. Many investors fear that the war could last much longer than expected by the USA. The Dax plunges by 6.1 per cent. Shortly after that, the long rise of the Dax begins, reaching a high of 8,151 points on 13 July 2007.

Fears of an economic downturn in the USA are spreading, and more and more banks have to admit that they have been affected by the mortgage crisis. The third week of January 2008 is particularly turbulent. The Dax plunges from 7,300 points down to around 6,400 before recovering somewhat. 21 January is turning into “black Monday”. At over seven per cent, Germany’s leading index records the biggest drop in share prices since 11 September 2001. The financial crisis is already casting its shadow.

Shortly after the Lehman bankruptcy, Hypo Real Estate made negative headlines. Despite the agreement on a 50 billion credit line for the ailing mortgage bank, Hypo Real Estate’s massive share price loss drags first the banking sector and then the Dax down by more than five per cent.

On 1 November 2011, the Dax will lose around five per cent. The trigger is the surprise announcement of a referendum in Greece on a rescue package by the then Prime Minister Giorgios Papandreou.

The failure of talks to resolve the debt crisis in Greece and the surprising announcement of a referendum on creditors’ claims will push the Dax down by up to 4.6 per cent at the end of June 2015. The leading index may recover somewhat later on.

After the decision of the British to leave the EU (“Brexit”), the situation looks very bleak at times. The Dax collapses by 10.1 per cent. In the course of the day, the leading German index recovers somewhat and closes with a minus of 6.8 per cent.

One thousand one hundred and seventy-five – or in numbers 1,175: That’s how many points the Dow Jones Index loses on this day – the biggest point loss in Wall Street history to date. What had happened? Rising wages point to rising inflation, bond yields are rising significantly again, uncertainty is rising under President Trump, and sensitive trading systems automatically trigger sales.